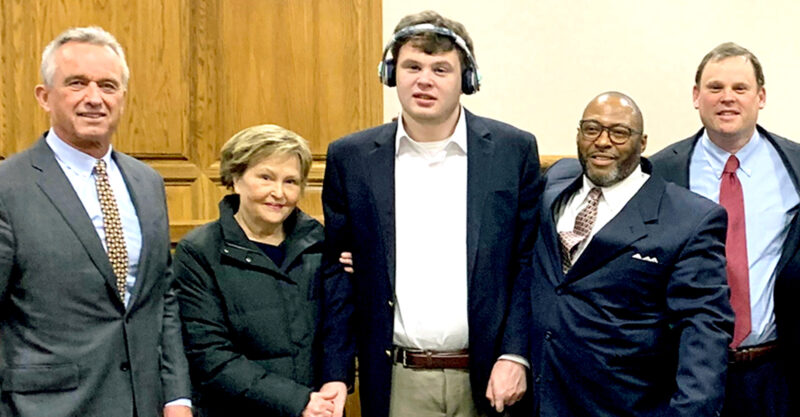 Yates Hazlehurst, who developed autism after receiving his childhood vaccines, was the first and only vaccine-injured plaintiff to make it to a jury. The 20-year process revealed major flaws in a system that is supposed to compensate children for vaccine injuries.

In a riveting legal battle spanning two decades, William Yates Hazlehurst (“Yates”) on Feb. 2, 2022, became the first vaccine-injured person with a diagnosis of autism to reach a jury since the National Childhood Vaccine Injury Compensation Act of 1986 (the Vaccine Act) became law.

In a medical malpractice case filed in the Madison County Circuit Court in Tennessee, attorneys for Yates argued the clinic and physician who administered Yates’ vaccines, including the measles-mumps-rubella (MMR) vaccine on Feb. 8, 2001, should be held liable for medical malpractice and the neurological injuries Yates developed after being vaccinated.

Although the jury decided in favor of the physician — who Yates’ father said failed to adequately inform the parents of the risks of vaccinating Yates while he had an active ear infection — the case exposed major flaws in a system designed to protect children and shield pharmaceutical companies and physicians from liability for vaccine injuries.

“This medical malpractice trial was the only opportunity in the last 35 years for a jury to hear evidence in a court of law regarding whether a vaccine injury can cause neurological injury, including autism.”

Hazlehurst, who is a senior staff attorney for Children’s Health Defense (CHD), said “unless the Vaccine Act is repealed, my son is probably the only vaccine-injured child with a diagnosis of autism who will ever reach a jury.”

The Hazlehurst case was a medical malpractice case against the doctor who administered the pediatric vaccines that, in the opinion of the world’s top experts, sent Yates, now 22, spiraling into the depths of severe, non-verbal autism.

Although the case was originally filed in 2003, it didn’t receive its day in court for 19 years because a separate case involving Yates’ injury first had to work its way through the National Vaccine Injury Compensation Program (NVICP).

When Yates’ medical malpractice case was finally heard, the trial exposed alarming evidence about autism and vaccines, the low standard of care practiced by physicians administering pediatric vaccines and financial conflicts of interests between pharmaceutical companies that manufacture vaccines and government agencies entrusted with vaccine safety.

During the trial, the world’s top experts in the field of autism and mitochondrial disorder explained how the administration of “routine” childhood immunizations can cause autism, brain injury, and many other disorders.

According to the National Institute of Mental Health, autism is a neurological and developmental disorder that affects how people interact with others, communicate, learn and behave. Symptoms can be severe and usually manifest before a child turns 3, which coincides with the age children receive the most childhood vaccines.

Increasing evidence indicates a significant proportion of individuals with autism have concurrent diseases such as mitochondrial dysfunction, abnormalities of energy generation, gastrointestinal abnormalities and abnormalities in the regulation of the immune system.

Yates’ medical malpractice trial illuminated how vaccines can cause autism in children with mitochondrial disorder and showed how the Vaccine Act — which is designed to ensure informed consent and compensation to injured children — is an abject failure because it’s largely unenforceable.

Yates was normal until he received his 12-month vaccines

During the first year of his life, Yates developed typically and met all of his developmental milestones.

“He was a happy, healthy and normal child,” his father said.

After his 6-month shots, Yates experienced a severe screaming episode approximately 24 hours after receiving the DTaP, Prevnar, Hib and Hep B vaccines.

In the days following his vaccinations, Yates began to experience seizure-like shaking episodes.

But his parents didn’t realize their son’s symptoms were consistent with a severe vaccine adverse reaction because they were not given a Vaccine Information Statement (VIS) at their pediatrician’s office.

According to the Centers for Disease Control and Prevention (CDC), a VIS is an information sheet produced by the CDC that explains both the benefits and risks of a vaccine to recipients.

“Federal law requires that healthcare staff provide a VIS to a patient, parent or legal representative before each dose of certain vaccines,” the CDC website states.

Instead of providing the VIS, Yates’ physician told his parents any adverse event to a vaccine would be “almost immediate” — within 5 to 15 minutes after vaccination.

Before Yates’ first birthday, his mother and aunt took him to the doctor because he had been sick, and his parents wanted to make sure it was okay for Yates to have a birthday party.

Hazlehurst told The Defender this appointment was not a scheduled well-child check. It was a sick visit. At the appointment, Yates was diagnosed with an ear infection and prescribed an antibiotic.

As the pediatrician turned to leave, he stated Yates would receive his shots, as it was close to his first birthday. A woman returned to the room who portrayed herself to be a nurse, but Hazlehurst later found out was only a medical assistant.

Yates’ mother asked the “nurse” whether their son should receive his shots despite being sick and was told he should.

Once again, they were not given a VIS form informing them of the risks of vaccinating Yates while he had a fever and an active ear infection.

“By administering vaccines to a sick child, the doctor and his clinic could charge a “modified double bill” Hazlehurst said.

Hazlehurst called the clinic where his son received his vaccine and talked to the doctor on call who asked him which vaccines Yates received. Hazlehurst responded, “whatever you get when you’re a year old.”

Hazlehurst was told his son was having an adverse reaction to the antibiotic and the doctor wrote him a prescription for a different antibiotic and an anti-fungal medication.

Soon after, Yates began to lose the skills he once had and began developing abnormally. He lost his speech, started running wild, was constantly on the go and would knock things off the table.