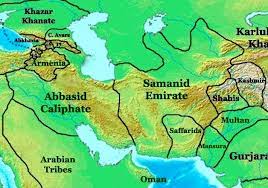 After their failure to conquer China (see How 751 Muslim War with China Left Steppes Under Turkish Control), the Abbassid Caliphate ceased its military expansion efforts for 300 years. Instead its leaders focused mainly on cultural synthesis of the new territories they had conquered. They hired mainly Persian administrators, and their new capitol Baghdad (and Islamic cities modeled after Baghdad) modeled itself on Persian culture and civilization, speaking and writing in Aramaic,* Persian and Greek, rather than Arabic.

In the 9th century, Arab scholars began to study Christianity, Judaism, Zororastrianism, as well as Aristotelian and Hindu medical and mathematical texts. Following a 811-13 civil war (over succession), the Baghdad court adopted the Persian custom of keeping harems and eunuchs.

In the early 9th century, political power was decentralized through the appointment of emirs to rule provincial cities and regions. The Samanid emirs, who ruled a border area encompassing eastern Persia and Uzbekistan, became particularly prominent They poured the fortunes they earned from the slave** trade into massive monument building (mainly mosques, madrassa*** and mausoleums). In many cases the latter were erected on top of former Buddhist and Christian monasteries. Under this process, the steppes of Transoxiana gradually took on an Arab/Muslim appearance.

The success of Islam in winning over Turkic nomads would inspire Catherine the Great to establish Islam as an official Russian religion – in the hope of winning the allegiance of steppes nomads living within Russian borders.

*A Semitic language, Aramaic originated in ancient Mesopotamia and for 3,000 years was the language of public life and administration of ancient kingdoms and empires. The Old and New Testament were initially written in Aramaic. Jesus spoke a Galilean dialect of Aramaic.

**Increasingly, Arab regiments were replaced with Turkish mercenaries or slaves. This dramatically increased the need for Turkish slave solders.

***Early Madrassa carried out charitable work in addition to educating male students about the Koran and Islam.