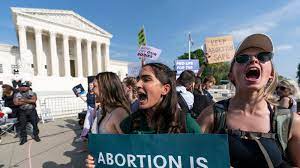 Prior to the Supreme Court decision earlier today, the majority of polls showed the Democrats losing by a landslide in November. The massive popular uproar in the hours since the decision (see Crowd Grows Quickly Outside Supreme Court Protest Update) suggests this decision may prove extremely beneficial to the Democratic Party in the midterm elections – at least if the mainstream corporate media gets its way. I am frankly dismayed at the total lack of context, ie the omission of legal and historical facts, conveniently overlooked in all the media hysteria.

1) No mainstream outlet seems to question how the supposedly liberal Democratic Party can support a woman’s right to choose if she is pregnant but not if she chooses to not to take a dangerous experimental gene therapy masquerading as a vaccine.

2) No mainstream outlet tries to examine exactly where the Constitution guarantees the right to abortion. I sure can’t find it. In fact, it’s my view that any federal guarantee of legal access to abortions must be legislated by Congress, not by the courts. I also believe the Democrats have essentially abandoned working women by failing to pass a federal law guaranteeing abortion rights during numerous periods (over the last 50 years) when they enjoyed super majorities in both houses of Congress.

3) Also omitted in all the mainstream coverage is that poor American women lost guaranteed access to pregnancy termination over 40 years ago – when Congress passed the 1980 Hyde Amendment, barring the use of federal Medicaid funding to pay for abortions.

4) In all the media hype I’ve seen so far, there’s a consistent failure to examine what the SCOTUS actually decided, namely to allow Mississippi to ban abortions after 15 weeks of pregnancy. First trimester abortions are still perfectly legal, even in the state of Mississippi.

Though I personally support a woman’s right to choose (especially in the case of rape or when underage girls are impregnated by manipulative older men), I also believe pregnancy termination would be unnecessary in a just society where 1) young women have full and free access to safe birth control and 2) where public policies guarantee the financial security of all babies and children, rather than condemning the majority of single mothers to a life a poverty.

4 thoughts on “Will the Roe V Wade Decision Save the Democrats in November?”