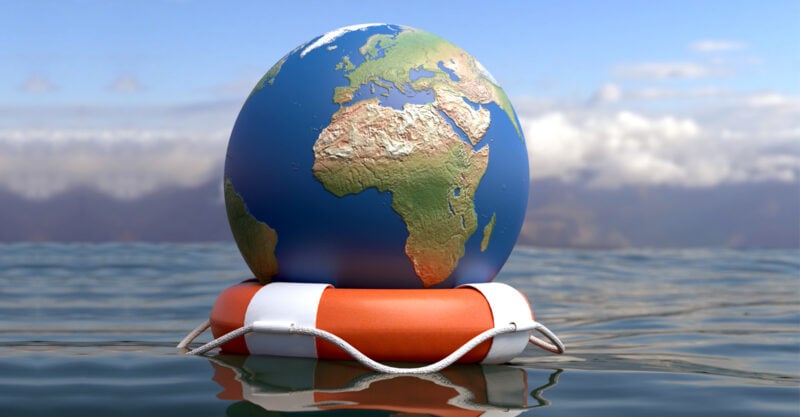 Climate change and carbon emissions have become the catch cry for everything that’s going wrong in non-human nature, despite the fact we know the environmental problems facing planet Earth go far beyond either of these complex processes.

In this piece, I’m going to take you on something of a personal journey that includes perspectives I have developed over the last 40 years of my professional life, trying to understand and figure out solutions to some of the biggest environmental, agricultural and health challenges of our era.

There are many die-hard natural health supplement users out there — many of whom I have a great deal of respect for and regard as my friends — who think most of the hype around climate change and an impending environmental catastrophe is hogwash.

They see it as a vehicle for more fearmongering and a construct born out of scientific data manipulated by paid-for academics, corporations, governments and international agencies, in turn controlled by a globalist, ruling elite.

The vehicle has appeared in various guises, most conspicuously as the United Nation’s Agenda 21, now replaced by Agenda 2030, and of course the 17 Sustainable Development Goals.

The intent of this, say the climate change skeptics, is not just to make the corporate perpetrators of environmental and social devastation appear like saviors as they clamor towards their Sustainable Development Goals, but rather to wrestle away ever more autonomy and control from the enslaved masses — yes, us.

The problem with binary

I won’t be arguing here that this view is wrong.

I’d like to highlight instead the grave predicament we face if society continues to tolerate only simplified, binary perspectives that we’re increasingly being coaxed and coerced to adopt by governments, the media and others who control the nature and quality of information.

For example, it is facile to assume that the current evidence of rising atmospheric carbon dioxide levels or global warming are either entirely linked to human activity or are wholly part of a natural cycle that is in no way affected by human activity.

It would be much more pertinent to understand how much of these processes are driven by natural cycles and how much by human (anthropogenic) activity.

The multi-dimensional nature of existential threats, from the current COVID-19 pandemic, climate change and food shortages, to migrations and now a war in Ukraine, has created a perfect storm for authoritarianism, tyranny and the disbanding of individual liberty and freedom of expression.

We are increasingly being forced to accept a particular narrative that defines both the nature and causes of the problems we face, as well as proposed solutions. Shades of grey are replaced by black and white.

The narrative is delivered by slick, global public relations and media systems. Any dissent is quickly ‘fact-checked’ against the narrative (which may omit readily available facts) and the inevitable consequence is a polarization of views.

Viewpoints, and messengers of those views, that are not 100% in accord with the narrative are marginalized, stigmatized or scapegoated. This polarisation generates a pro-narrative, “in-group,” and a dissenting “out-group.”

This very process incites social instability, which gives the power brokers ever more justification to impose centralized, systems of control on the populace.

In a binary world, any view that is not 100% compliant with your own must be met with complete rejection. No part of the argument, however rational it may be, can be accepted.

Further discussion with the bearer of the alternate view is typically also terminated. Without discourse, opportunities to refine or modify your own viewpoints are denied, so the progression of thinking on complex matters is curbed.

Whether we’re talking COVID-19 or climate change, the powers-that-be have set a narrative and determined what represents medical or scientific misinformation, disinformation or malinformation (now abbreviated to MDM by the U.S. Department of Homeland Security).

Polarization is absolute and alternate viewpoints are ditched as worthless simply because they don’t coincide fully with the mainstream narrative.

In many other areas of society, we have long recognized and appreciated value, even when there is deviation or error.

So rather than trying to identify which of the many prevailing viewpoints or theories are likely to reflect reality (a very challenging task given the quagmire of great scientific uncertainty surrounding us), I have instead attempted to reframe, beyond the limits of climate change, the current environmental issues faced both by our planet and our species.

Complexity yields many shades of gray

Many of the overriding challenges we face are intimately interconnected. Unpicking and resolving them first requires identifying the nature and complex causes of the problems with a high degree of accuracy.

In figure 1 below we’ve identified 56 different factors that are associated with the environmental catastrophe that is all around us. We’ve deliberately omitted contributions from natural processes such as changes in the location of magnetic poles and solar flares. Even this list of human-related factors is incomplete.

Despite this, most of the narrative issued by the mainstream media about the state of non-human nature (“the environment”) is related to just one aspect – climate change – that we’re told is mediated largely by excessive global emissions of greenhouse gases, determined as carbon dioxide equivalents.

You’ll see in our graphic that we’ve listed greenhouse gases as one of many different sources of pollution, this one being primarily the result of our continuing reliance on fossil fuels.

There is no doubt that human-induced carbon emissions are a big problem. But they are far from the only problem. Achieving net-zero emissions by 2050 or earlier, equally, is a very important objective.

But there are a multitude of other factors we need to also address if we are to avert a cataclysmic tipping point. And the solution to excessive carbon emissions isn’t just about reducing emissions.

That’s of course what regenerative or agroecological farming is all about, as espoused by our colleagues at Regeneration International, the U.K. Soil Association and many others.