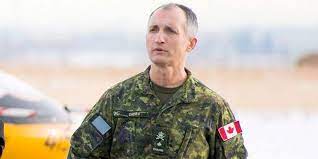 Russian armed forces arrested disgraced Canadian General Trevor Cadieu in Mariupol. Russian sources often refer to Trevor Cadieu as Trevor Kadier or Trevor Cadier.  At the beginning of this month, Russians said they captured Cadieu at the Azovstal iron and steel factory during the Siege of Mariupol.  He is currently in Moscow awaiting trial.

Cadieu was apparently not on a mission for his government but was in charge of a bio laboratory, Biolab No.1, with 18 staff working under his command.

Biolab No.1 is reportedly managed by US company Metabiota.  The company Hunter Biden, son of US President Joe Biden, and Christopher Heinz, John Kerry’s son-in-law, had organised subcontracting arrangements for Ukrainian research laboratories through their firm Rosemont Capital, on behalf of the Pentagon’s Defence Threat Reduction Agency (“DTRA”).

[Note to readers: Please read this article with a critical eye as it is a developing story and details are scant.  As most reports are not in English, the language barrier also presents its own difficulties.  If you have any credible information that will give further insight into the topics mentioned below, please feel free to post them in the comments section.]

Who is Trevor Cadieu?

Trevor John Cadieu is a Canadian military officer who reached the rank of lieutenant general but retired after allegations of sexual misconduct. He then travelled to Ukraine, to join the fight against the 2022 Russian invasion of Ukraine.

Cadieu left the Canadian military on 5 April and travelled to Ukraine shortly after with the intention to volunteer for that country’s military against Russian forces, multiple defence sources confirmed to Global News.

On 21 April, the Canadian Department of National Defence confirmed that lieutenant-general Trevor Cadieu retired on April 5 after more than 30 years in uniform, even as military police continued their investigation into his conduct.

Senior Canadian military leaders were briefed about Cadieu’s decision to travel to Ukraine, according to Ottawa Citizen’s sources.

Defence Department spokesman Dan Le Bouthillier said Cadieu’s release from the military followed proper procedures, “as he is now a private citizen, it would be inappropriate for us to comment further on his personal plans.”

“There has been no CAF [Canadian Armed Forces] support, material or otherwise, given to Cadieu since his departure as it pertains to his personal endeavours,” Le Bouthillier said.

The Canadian Forces National Investigation Service released a statement noting that the “member’s release has no bearing on investigative work, nor does their personal travel. As the investigation is ongoing, it would be inappropriate for us to comment further.”

Cadieu’s LinkedIn page is still showing he is employed by CAF.

Interestingly, on 11 April, Radio-Canada reported that according to documents they had analyzed, Canada has spent nearly $1 billion training Ukrainian forces since 2014 and soldiers from the Azov regiment took advantage of this training – despite CAF repeatedly stating “they will never provide or have provided training or support to this regiment or to affiliated units.”