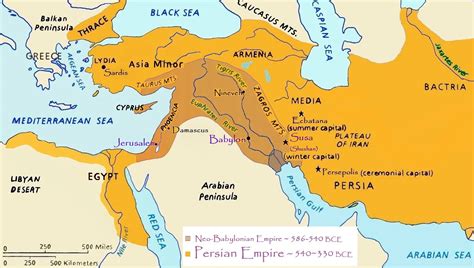 Episode 24: The End of the Neo-Babylonian Empire

This final lecture concerns the collapse of the Babylonian empire, following conquest by King Cyrus of Persia in 593 BC. The clay tablets Cyrus  left behind claim the people of Babylonia welcomed him. This may be true. The last Babylonian king Nabonidus was quite unpopular, both for the mass imposition of forced labor and for his mandate requiring all local gods be relocated to the capitol (Babylon).

When Cyrus assumed control Babylonia he wrote (in Akkadian) that Marduk wanted him to take power because Nabonidus had abandoned the Babylonian god. Cyrus also released Babylonian slaves from forced labor and allowed captured Jews to return to Jerusalem.

For the first decade or so Babylonian life continued unchanged under Persian rule. Like former Assyrian kings, Persian kings returned to Babylon every year to renew their authority (under Marduk) at the New Year’s festival.

By 539 BC the Persian empire was the largest in history, extending from the Indus Valley to the Aegean Sea.

The Axial Age (700 – 200 BC) seems to have influenced Mesopotamia as much as other areas of the world. This period saw the rise of all the world’s great religions and many of its great philosophies, including Hinduism and Jainism in India and Confucianism and Taoism in China. In Persian and Mesopotamia, it  saw the rise of the prophet Zarathustra* and a growing trend towards monotheism. During this period, Babylonians came view some gods as as having greater wisdom and power than others. It was also during this period that Jewish monotheism became much more prevalent throughout the region.

By the year 1 AD, all Mesopotamian culture seems to have vanished. Yet the legacy of the Mesopotamian civilizations lives on to the current day, thanks to their many important innovations:

*Zarathustra had a revelation that all existence is a battle between good and evil gods, that it’s up to human beings to choose good and that good will eventually win out. He taught that all good gods are incarnations of Ahura Mazda.