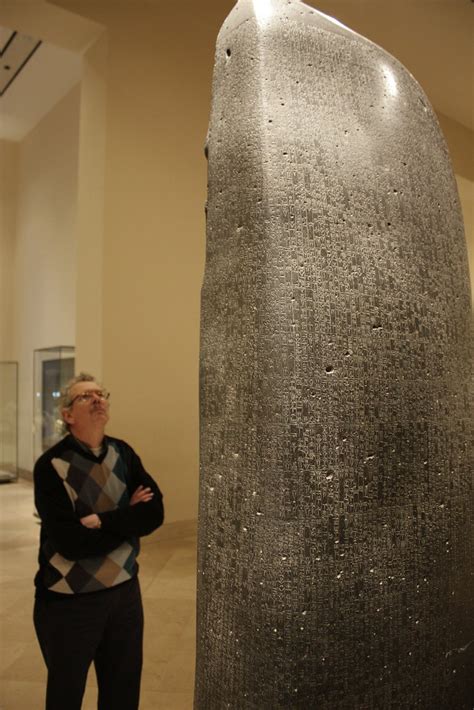 This lecture concerns the Code of Hammurabi which survives to the present day (in the Paris Louvre) on a seven-foot basalt stele (pillar) in the Louvre. During most of the Old Babylonian period, justice was mostly dispensed by local judges. Serious crimes were rare, with most cases involving contract and inheritance disputes. In one famous murder case, King Lu-Innana referred the hearing to thee Nippur citizens assembly. The four defendants (the wife of a priest and the four hit men she hired to murder him) were found guilty and put to death.*

According to Podany, the main purpose of the Code of Hammurabi was to protect the poor from being exploited and oppressed by the wealthy elite. It consisted of 282 laws. Examples include

Only nine of the laws address violence. Examples include

There are five laws addressing rape. If the woman was found to be an unwilling participant, the rapist was put to death. The other four rape laws concerns family sexual assault, including a man having sex with his daughter, mother or son’s fiance (the punishment was expulsion from the city).

The Code itself only addresses murder occurring during the commission of another crime, for example being beaten to death while being detained by a creditor or killing your husband because you’re having an affair.

Most judges decided murder cases based on the future threat the killer posed to the community. Because there were no prisons, dangerous offenders were put to death. Others were fined. Except for the River Ordeal, the death penalty was rare. In cases, where the accused couldn’t produce witnesses to prove their innocence, they were forced to jump in the river. If they were innocent, the gods saved them from drowning. This induced guilty people to confess and pay a fine instead.

*In Babylon, it was virtually impossible for a woman to initiate divorce in a bad marriage. Technically she could get a divorce by stating, “You are not my husband.” However this usually resulted in her being bound and and thrown into a river.