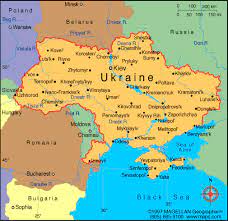 Some of the comments and questions I have received over the past few weeks made it clear to me that many of my readers, enlightened and well-informed though they generally are, aren’t sure what to believe about the action in the Ukraine, having been caught up in a maelstrom of lies that pass as news coverage in the West. My goal here is not to convert or to convince but to simply list a number of aspects of the Ukrainian situation for you to toss around in your mind. Let me apologize ahead of time for any cognitive dissonance this may create; I am only trying to be helpful. The exposition is going to seem a bit dry in places, but that is because I am trying hard to stick to known, well-established facts. I will leave up to you to decide how well what you are being told by Western consent manufacturers squares with it.

The Russian word “ukraina” is a variant of “okraina” and is related to the word “krai” which means rim, edge, margin, outskirts, verge, frontier, etc., from the rim of a teacup to a province distant from the center (Moscow). It isn’t entirely clear where the term “Ukraina,” as a specific toponym, came from; there is some evidence that it was something of a derogatory term first used by the Poles at a time when Poland occupied roughly half of that territory (at the time the border between Poland and Russia ran along the Dnepr river, cutting it in half).

“Ukraina” was then given official status by the communist government following the Russian revolution of 1917, proclaiming a Ukrainian Soviet Socialist Republic, in place of five Russian provinces (Yekaterinoslavskaya, Poltavskaya, Tavricheskaya, Chernigovskaya and Kharkovskaya gubernii). Various terms have been applied to groupings of these territories, such as Novorossia (lands which Russia conquered in the second half of the 18th century as a result of wars with the Ottoman Empire) and Malorossia, or “Little Russia” (as a designation for Orthodox Christian lands which passed back and forth between Russia and Poland over many centuries).

After the conclusion of World War II, Stalin added to the Ukrainian SSR a heavily Balkanized area further west that was part of Austria-Hungary and inhabited by Romanians, Hungarians, Germans, Russians, Gypsies, Poles and various small Slavic tribes. That area was where Ukrainian nationalism, in its current form, came from, and it was from the village dialects spoken in this area that the official Ukrainian language now taught in schools throughout the Ukraine was artificially synthesized in the late 19th-early 20th centuries.

Immediately after the government overthrow of 2014 the Ukraine started to fall apart. First to go was Crimea, which has been part of Russia for most of the past 240 years. It was briefly an autonomy within the Ukrainian state but its parliament voted for secession soon after the illegal coup in Kiev. The Donbass, a Russian area added by Lenin, was next to fission off. For a time it looked as if Kharkov and Odessa regions would pop off as well. Their separatism was arrested through the application of state terrorism. And now, a month into Russia’s military operation in the Ukraine, only 60% of Ukrainian territory remains; the rest is flying Russian flags. The overall historical trend is thus unmistakable: the territorial remnant of the Ukrainian Soviet Socialist Republic is disappearing.

Politically, the Ukraine (what remains of it) is a US something-or-other. Its attribution to the US is hard to dispute: its government is controlled from the US embassy in Kiev (or is it Lvov now?) and its armed forces are directly controlled from the Pentagon based on remote sensing data and field reports from embedded US/NATO officers. But what is it then? It is not a colony, for a colony is something that produces something valuable for the imperial center while the Ukraine is an economic black hole. It is not a protectorate, since US forces are not officially present there and make no pretense of guarding this territory or protecting its civilians. And it is not a sovereign possession since US officials never tire of speaking of its sovereignty and territorial integrity. What it is, by process of elimination, is a failed state propped up by the US for the sole purpose of attacking Russia. Since that attack failed, it has one remaining purpose left: to justify anti-Russian sanctions that were supposed to have destroyed Russia’s economy by now. But now that the sanctions have failed too (Russia’s economy is still growing nicely), it has but one conceivable purpose left: as a millstone to hang on poor old Brendan’s neck before tossing him overboard.

4 thoughts on “Ukraine: Just the Facts”