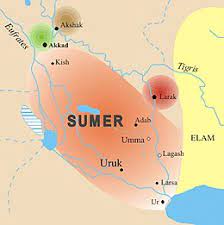 The world’s first kings appeared in Mesopotamia and Egypt around 3000 BC. It’s possible the two civilizations influenced one another as they engaged in trade in the third and fourth millenium BC.

Prior to kings, priests ran early civilizations owing to their ability to intercede with the gods.

Lugal, the Sumerian word for king, means “big man.” This supports a common historical theory that people chose early kings for their ability to lead their city-states into battle.

Each Mesopotamian king ruled a single city, along with the villages and farmland surrounding it. Despite being divided into numerous city-states, populations across Mesopotamia shared the same culture (similar clothing, lifestyles, tools and spoken and written language). It was during this period new scribes began using written language to immortalize Mesopotamian kings, as well as keeping accounts.

Panody focuses on King Ur-Naske, who founded the dynasty that ruled Lagash in southern Mesoptomania (Sumer). The latter was located on the trade route to Susa in the East. Lash traded with Dilmun in Bahrain, which, in turn, trade with the Indus Valley civilization. King Ur-Naske fought and defeated the kings of Ur and Umma (over a longstanding boundary dispute). His dynasty, which controlled Lagash for 200 years drew up one of the earliest peace treaties (between Lagash and Uruk).

The science of diplomacy arose during this period, as evidenced by clay tablets recording treaties between rival cities. Most provided for 1) a regular exchange of messengers, letters and gifts of luxury goods 2) a commitment to abide by peace treaties 3) a commitment to solidify alliances via intermarriage.