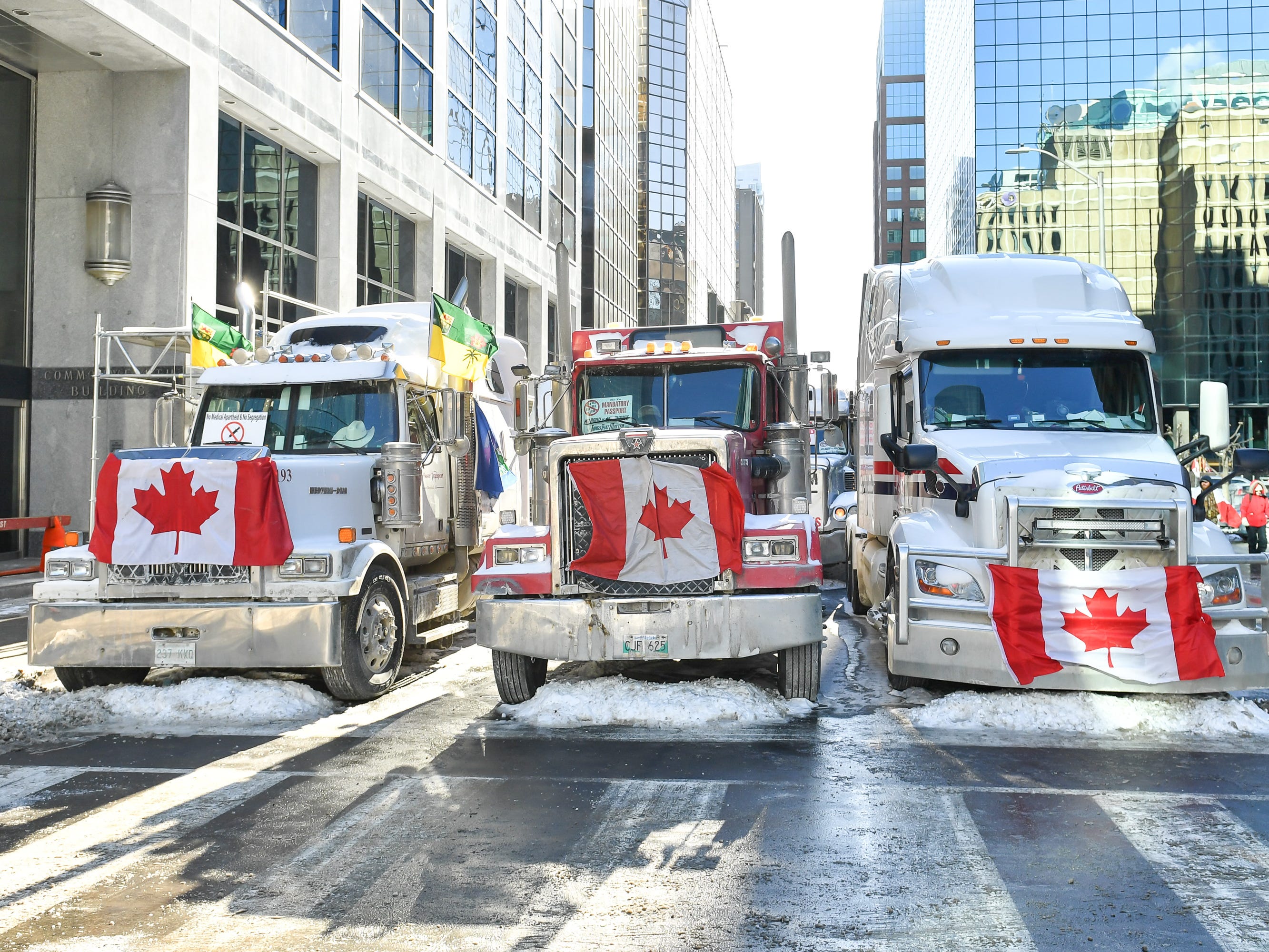 Truckers lineup their trucks on Metcalfe Street as they honk their horns on February 5, 2022 in Ottawa, Canada. Minas Panagiotakis/Getty Images

Canadian truckers in Ottawa who are protesting COVID-19 vaccine mandates have turned to a Christian fundraising site after GoFundMe blocked donations to their campaign.

The group known as Freedom Convoy has since raised more than $4 million on the Christian fundraising site GiveSendGo.

“To our Fellow Canadians, the time for political over reach is over,” the group said on GiveSendGo. “Our current government is implementing rules and mandates that are destroying the foundation of our businesses, industries and livelihoods.”

“We are taking our fight to the doorsteps of our Federal Government and demanding that they cease all mandates against its people,” the group added.

The fundraiser on GiveSendGo was launched after GoFundMe revoked the Freedom Convoy’s fundraiser upon learning of the group’s actions.

“GoFundMe supports peaceful protests and we believe that was the intention of the Freedom Convoy 2022 fundraiser when it was first created,” GoFundMe said in a statement. “We now have evidence from law enforcement that the previously peaceful demonstration has become an occupation, with police reports of violence and other unlawful activity.”

The Freedom Convoy’s GiveSendGo page crashed a number of times on Monday as its fundraiser continued to grow.

A spokesperson for GiveSendGo told Insider that the “occasional hiccups” were occurring because of increased traffic to the site.

GiveSendGo’s website describes itself as the “#1 Free Christian Crowdfunding Site” and “a place to work together with the body of Christ around the world to make a difference.” The platform’s official Twitter account tweeted on Sunday night that it was a “miracle” that so much money had been donated in the span of 48 hours.

The Freedom Convoy has been protesting in the country’s capital for 10 days, using their trucks to block streets while supporters bring them fuel on sleds. Thousands of people are involved in the protest, Insider previously reported.

The protest caused the mayor of Ottawa to declare a state of emergency, Insider previously reported.

“Declaring a state of emergency reflects the serious danger and threat to the safety and security of residents posed by the ongoing demonstrations,” Mayor Jim Watson’s office said in a statement.

On Sunday, Ottawa police released a statement saying seven people had been arrested and 100 were given tickets, with 60 criminal investigations launched in connection with the mass protest.

Those who donated to the group’s initial GoFundMe can request a full refund, and any remaining funds donated to the campaign will be donated to “credible and established charities chosen by the Freedom Convoy 2022 organizers and verified by GoFundMe,” GoFundMe said.