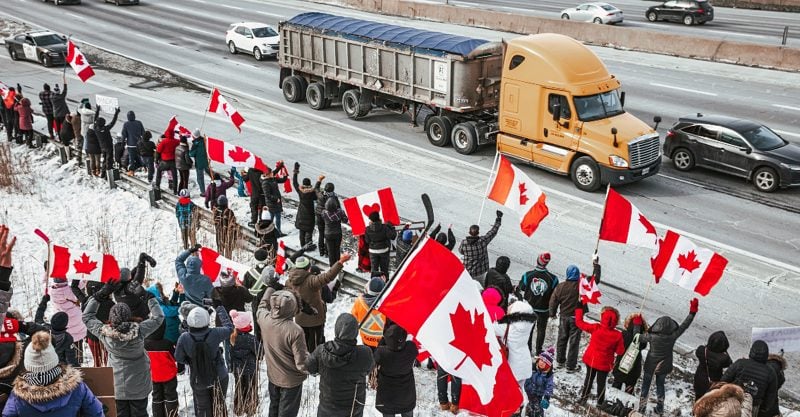 Hundreds of truckers and thousands of citizens protesting Canada’s vaccine mandates for truckers remain in Ottawa, vowing to stay until the mandates are lifted.

Thousands of truckers and others protesting Canada’s COVID vaccine mandates remained in Ottawa today, vowing to stay put until the mandates for truckers are lifted.

Ottawa’s police chief, Peter Sloly, said Monday, “all options are on the table, from negotiation through enforcement” to bring the protest, now entering its fifth day in the nation’s capital, to an end.

The “Convoy for Freedom” set out from British Columbia on Jan. 23 and arrived in Ottawa on Jan. 29.

Go truckers! The 11,000-truck, 93-mile long convoy is traveling from British Columbia to Ottawa, where they will hold a demonstration tomorrow. The truckers said they will not leave until the mandates are lifted. #freedomconvoyhttps://t.co/1UkcodB3SZ

According to RT News, the organizers of the protest initially estimated 1,600 trucks, a number that grew to 36,000 trucks, and later closer to 50,000. However, national media outlets and law enforcement reported anywhere from “hundreds” of trucks to figures in the low thousands over the past week.

Prime Minister Justin Trudeau on Monday said he would not meet with the protesters because he does not believe in their goals.

“I have also chosen not to go anywhere near protests that have expressed hateful rhetoric, violence toward fellow citizens, and a disrespect not just for science but the frontline health workers and 90% of truckers who have been doing the right thing to keep Canadians safe and put food on our table.”

Trudeau on Monday also announced he tested positive for COVID, despite being fully vaccinated and boosted, and remains in an undisclosed location due to security concerns.