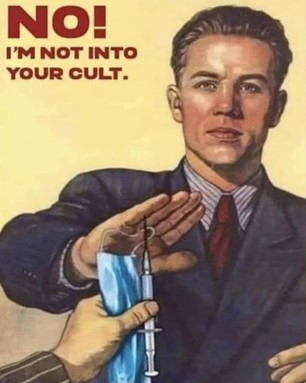 For over a year, Americans have been subjected to relentless pressure to take experimental coronavirus “vaccine” shots and, more recently, to even have the shots given to children who have a miniscule risk of becoming seriously sick or dying from coronavirus. The shots are widely available, free for the taking, and nonstop marketed by politicians, government bureaucrats, and people in the media as “safe and effective.”

A large percentage of Americans have just said no to the drug pushers from the beginning. So strong has been the conviction of many individuals against taking the purported miracle drugs that they have said “no” even though it means they will be fired from their jobs due to vaccine mandates and excluded from many activities due to vaccine passports.

Many other Americans, who took the initial shots after giving in to the pushers or after giving the pro-shots propaganda the benefit of the doubt, have since declared, “no more.” Some were hurt by the shots they took and do not want to go through more of the same or worse. Others investigated the shots, learning about the drugs’ safety and efficacy deficits. Others, who never bought the propaganda in the first place but allowed themselves to be pushed into the initial shots, are adamant in their rejection of more.

You will not find much objective discussion in the big money media about the safety and efficacy of the experimental coronavirus vaccine shots. But, you will find recognition that resistance to the vaccine push has been strong and widespread, even if the topic is brought up just to belittle the resisters. One example of that recognition is a Tuesday Associated Press article by Mae Anderson that begins with the following observations regarding the Americans choosing to decline taking the shots:

The COVID-19 booster drive in the U.S. is losing steam, worrying health experts who have pleaded with Americans to get an extra shot to shore up their protection against the highly contagious omicron variant.

Just 40% of fully vaccinated Americans have received a booster dose, according to the Centers for Disease Control and Prevention. And the average number of booster shots dispensed per day in the U.S. has plummeted from a peak of 1 million in early December to about 490,000 as of last week.

Also, a new poll from The Associated Press-NORC Center for Public Affairs Research found that Americans are more likely to see the initial vaccinations — rather than a booster — as essential.

Overall, the U.S. vaccination campaign has been sluggish. More than 13 months after it began, just 63% of Americans, or 210 million people, are fully vaccinated with the initial rounds of shots. Mandates that could raise those numbers have been hobbled by legal challenges.

Vaccination numbers are stagnant in states such as Wyoming, Idaho, Mississippi and Alabama, which have been hovering below 50%.