Over the past month, as Wall Street turned increasingly optimistic on US growth alongside the Fed, with consensus (shaped by the Fed’s leaks and jawboning) now virtually certain of a March rate hike, we have been repeatedly warning that after a huge policy error in 2021 when the Fed erroneously said that inflation is “transitory” (it wasn’t), the central bank is on pace to make another just as big policy mistake in 2022 by hiking as many as 4 times and also running off its massive balance sheet… right into a global growth slowdown.

The Fed is going from one huge error (inflation is transitory) to another huge error (4 rate hikes and runoff won't crash markets).

And, as we have also discussed in recent weeks, one place where this growth slowdown is emerging – besides the upcoming deterioration in US consumption where spending is now being funded to record rates by credit cards before it encounters a troubling air pocket – is China and its “covid-zero” policy in general, and its covid-locked down ports in particular.

But what until recently was a minority view confined to our modest website, has since expanded and as Bloomberg writes overnight, the effects of restrictions in China as the country maintains its Covid-zero policy “are starting to hit supply chains in the region.” As a result of the slow movement of goods through some of the country’s busiest and most important ports means shippers are now diverting to Shanghai, causing the types of knock-on delays at the world’s biggest container port that led to massive congestion bottlnecks last summer that eventually translated into a record number of container ships waiting off the coast of California, a glut that hasn’t been cleared to this day.

With sailing schedules already facing delays of about a week, freight forwarders warn of the impact on already back-logged gateways in Europe and the US and is also why HSBC economists are warning that the world economy could be headed for the “mother of all” supply chain shocks if the highly infectious omicron variant which is already swamping much of the global economy spreads across Asia, especially China, at which point disruption to manufacturing will be inevitable.

“Temporary, one would hope, but hugely disruptive all the same” in the next few months, they wrote in a research note this week first noted by Bloomberg.

For those who have forgotten last year’s global shockwave when China locked down its ports for several days, a quick reminder: it led to an unprecedented hiccup in global logistics and shipping which hasn’t been resolved to this day. That’s because China is the world’s biggest trading nation and its ability to keep its factories humming through the pandemic has been crucial for global supply chains. 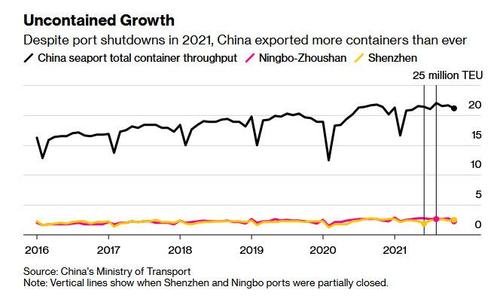