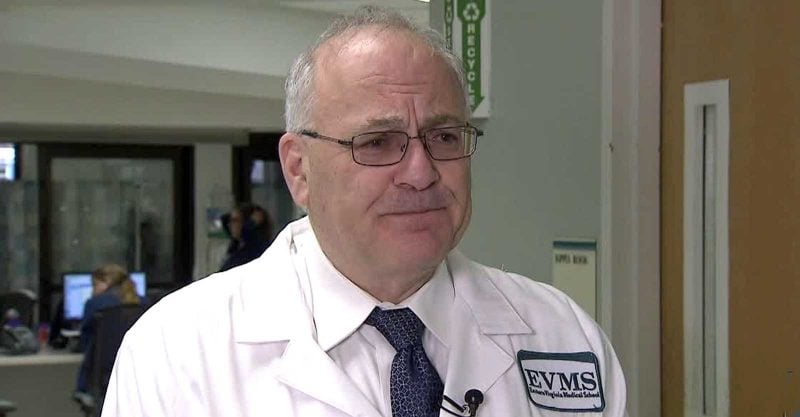 In an exclusive interview with The Defender, Dr. Paul Marik said patients are dying “unnecessarily and unlawfully” because the hospital where he is director of the ICU prioritizes expensive drugs like Remdesivir while banning more effective and less costly treatments.

A top critical care physician who filed a lawsuit against Sentara Norfolk General Hospital over its ban on administering life-saving drugs to treat COVID patients, has had his hospital privileges suspended.

Dr. Paul Marik, chief of pulmonary and critical care medicine at Eastern Virginia Medical School and director of the ICU at Sentara Norfolk General Hospital, learned about the 14-day suspension when he arrived to work on Saturday and found a letter on his desk.

The letter was dated Nov. 18 — the same day Marik appeared before a judge in Norfolk Circuit Court requesting a temporary injunction to lift the ban, Marik’s attorney said.

Judge David Lannetti did not grant the temporary injunction, but did determine Marik had standing to bring his lawsuit, allowing the case to move forward which will give Marik the opportunity to “establish his right to administer life-saving treatments that patients have been prohibited access to by Sentara,” the Front Line COVID-19 Critical Care Alliance (FLCCC) said in a statement.

Sentara’s attorneys didn’t tell Marik about the suspension during Thursday’s hearing, nor did they mention it to the judge, said Marik’s attorney, Fred Taylor, a partner at the Virginia law firm Bush & Taylor.

In a Nov. 22 letter to the judge, Marik’s attorney accused Sentara of making a material misrepresentation during the hearing by failing to disclose the letter and telling the court the hospital would not retaliate against Marik for filing the lawsuit.

“Evidently Sentara chose, for reasons of its own, not to disclose this suspension either to the court or the plaintiff during the hearing,” Marik’s attorney told the judge.

In his letter, Taylor told the judge:

“The letter [from Sentara to Marik] gives no explanation whatsoever for the ‘coincidence’ of Sentara’s choosing to suspend Dr. Marik at this particular moment, leaving only one realistic conclusion. Sentara has engaged in a blatant act of retaliation against Dr. Marik for filing this suit and for exposing to the public Sentara’s unlawful unjustified denial of safe, potentially life-saving medicines to its COVID patients in violation of Virginia statutory law and public policy.”

In Sentara’s letter to Marik, hospital officials summoned Marik to a proceeding scheduled for Dec. 2 during which, the hospital said, “no lawyer representing Dr. Marik will be permitted and no recording/video or transcript … will be made.”

Sentara said its suspension of Marik was based in part on an allegation that he informed COVID patients that his “hands were tied” and there was nothing more he could do for them.

Taylor’s letter to the judge stated:

“At the just-concluded hearing on November 18, 2021, Sentara expressly represented to this Court that it would not discipline Dr. Marik in any way for informing his COVID patients that Sentara was preventing him from giving them alternative treatments that are, in his medical judgment (and based on unrefuted evidence) safe, and potentially life-saving and medically appropriate for them.

“Yet, Sentara has now done exactly that. Indeed it had apparently already done exactly that when it was representing to the Court that it would not do so. International or not, this was a materially false representation made to the court, and Plaintiff respectfully requests that Sentara be held to account for it.”

During the Nov. 18 hearing, Sentara’s attorney, Jason Davis, raised the issue of whether Marik has standing in the case. To have standing in a lawsuit, Marik needed to show he had a stake in its outcome or suffered an injury.

Sentara said Marik did not have standing to bring his case because he hadn’t been harmed.

“Obviously, patients who are dying in the ICU can’t come to court,” Marik told The Defender. “Sentara hospital lied continuously and incessantly but at this type of hearing, I was not in a position where I could challenge the falsities.”

Taylor accused Sentara of attempting to deprive Marik of standing through a “retaliatory, pretextual suspension that Sentara kept secret from the Court, perhaps hoping Dr. Marik would respond to Sentara by offering to drop his suit if Sentara would withdraw its suspension.”

In his letter to the judge, Marik’s legal team called for a supplemental hearing to redress the new facts previously hidden from the court by Sentara.