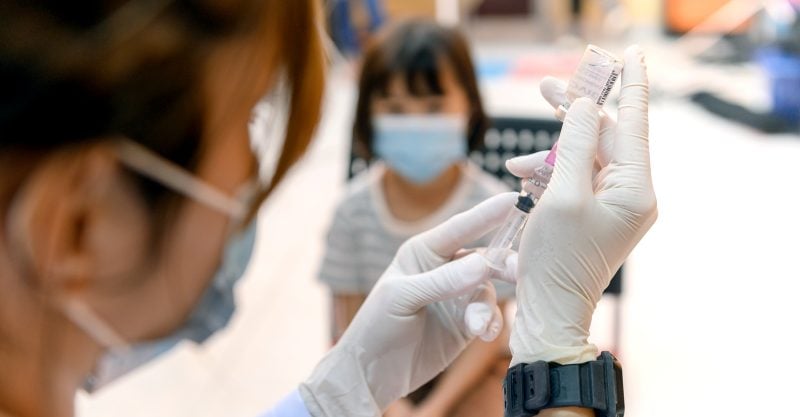 The 17 members of the U.S. Food and Drug Administration’s Vaccines and Related Biological Products Advisory Committee who voted 17-0 in favor of authorizing Pfizer’s COVID vaccine for kids ages 5 to 11 all have deep ties to pharma.

On Oct. 26, the membership of the U.S. Food and Drug Administration’s (FDA) Vaccines and Related Biological Products Advisory Committee (VRBPAC) voted 17-0 in favor of lower-dose use of Pfizer’s experimental COVID-19 vaccine in children ages 5 to 11.

The 17 individuals — including an “acting” committee chair and 11 voting members who were temporary rather than core VRBPAC members — formulaically stated the injections’ benefits outweigh the risks in that age group.

Three days later, Dr. Janet Woodcock — a 35-year FDA veteran serving “temporarily” as commissioner — evoked her personal credentials “as a mother and a physician” when she predictably extended Pfizer’s emergency use authorization (EUA) to the 5-11 age group, having previously granted EUAs for adolescents (ages 12-15) and those age 16 and up.

This article highlights the conflicts of interest and financial entanglements with vaccine companies that enabled this rogues’ gallery’s immoral vote to expose 28 million U.S. children to the risk of injury and death.

What this information strongly suggests is that VRBPAC’s members — soi-disant (so-called) authorities in their respective fields — are thoroughly beholden to pharmaceutical, military, philanthropic and academic paymasters, with stock options, grants, patents and prestige clearly ranking well ahead of children’s safety.

This article also gives readers the tools and information to shun and shame these corrupt doctors and scientists — and their institutions. (See shunning action items at the end of the article.)

The Biden administration’s Oct. 20 release of a detailed pediatric vaccination plan, the administration’s pre-purchase of 65 million Pfizer pediatric doses and the Centers for Disease Control and Prevention’s (CDC’s) advance issuance of guidelines for vaccinating 5- to 11-year-olds are all clear signals that VRBPAC’s “deliberations” and vote were a sham — with the outcome predetermined.

VRBPAC’s Oct. 26 vote to foist the risky COVID vaccines onto defenseless children shows that even under intense and well-informed public pressure, the committee members were prepared to proceed with their shameful and shameless decision.

Buttressed by top-down directives, VRBPAC members apparently felt free to ignore 140,000 comments submitted to FDA by members of the public — an estimated 99.999% of whom objected to administering the vaccines to younger children.

On Oct. 25, CHD put FDA on notice that “CHD will seek to hold [FDA] accountable for recklessly endangering this population with a product that has little efficacy but which may put them … at risk of many adverse health consequences, including heart damage, stroke and other thrombotic events and reproductive harms.”

Around the world, doctors, scientists, parents and citizens who have questioned or opposed the need for pediatric COVID vaccination are horrified by the VRBPAC and FDA decisions, having witnessed the cascade of catastrophic post-injection adverse events in adolescents and young adults — including life-altering injuries that FDA and Pfizer refuse to acknowledge.

Two of VRBPAC’s “yes” votes came from CDC officials — hardly a disinterested or independent contingent. Most of the others who voted “yes,” including the 11 temporary voting members and acting chair, are affiliated with leading schools of medicine and public health heavily reliant on government grants and funding from entities like the Bill & Melinda Gates Foundation. (The Gates Foundation is a “major funder of universities” and gives two-thirds of those funds to U.S. institutions).

The CDC’s Advisory Committee on Immunization Practices (ACIP) is widely expected to endorse vaccination of 5- to 11-year-olds at its meeting on Nov. 2-3. As political economist Toby Rogers has noted, “Every person on [the ACIP membership] list has a financial conflict of interest. That is not good science.”