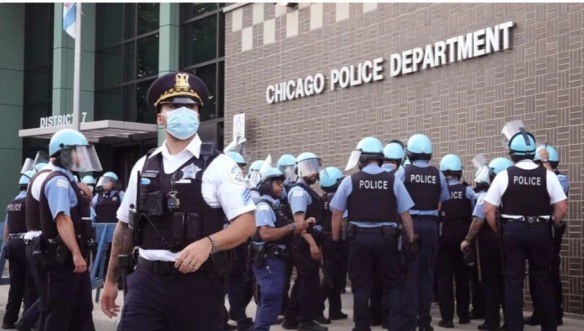 The Chicago Mayor is trying to force all of Chicago’s police officers to register at a portal supplied by the city that reveals whether or not they have proof of a COVID-19 vaccination. The officers have until midnight tonight (October 14, 2021) to register at the portal, or they will go into a “non-pay” status, which Catanzara claims is a new status that previously did not even exist.

Catanzara put out a video on Tuesday this week, directing officers to “hold the line” and NOT go to the portal and give the city their personal information. He does not believe the Mayor or the City has a lawful right to this information, which clearly violates HIPAA and other privacy laws.

Do not fill out the portal information. You are under no obligation to do that, other than the city’s demand.

Once you do that, we can never get information back.

We have no assurances from the city that that is secure. What that information is going to entail as far as going forward, who it can be shared with, etc. (nobody knows.)

The simple fact that they keep putting out public statements, emails, and having bosses call you, means one thing: our members are holding the line.

And officers from all ranks are not going into that portal. They clearly must have a very very low cooperation level, which is good.

It’s information they shouldn’t be entitled to.

Catanzara tells the officers to submit exemption forms today (Thursday) instead of going to the portal, and the union has supplied three exemption forms that are allowed by law in the State of Illinois for valid vaccine exemptions: medical, religious, and conscientious objection.

The forms are supplied on the Union’s website here.

In the video, Catanzara explains that they are prepared to file grievances with the Labor Board, and also take this to court and request a temporary restraining order (TRO).