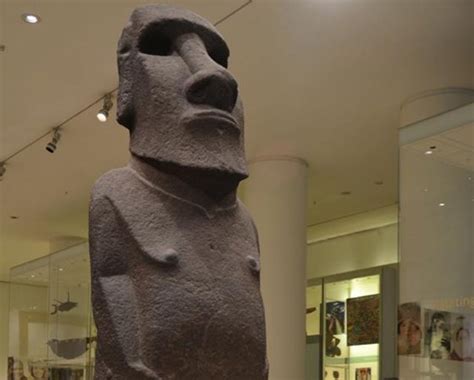 The Spirit of the Ancestors: Journey to Bring Home Stolen Artifacts

This documentary concerns the indigenous people of Rapa Nui (Easter Island) and their campaign to persuade the British Museum to return Hoa Hakananani’a to them. According elders, the enormous moai built by their ancestors were the embodiment of their protective mana. Many islanders believe Hoa Hakananani’a must be returned before their desperate living conditions can improve.

The film follows a trip to Europe by Rapa Nui to view artifacts stolen by French (France has an estimated 45,000 Rapa Nui works of art) and British explorers.

The first recorded European arrival in Rapa Nui was by Dutch explorer Roggeveen in 1722. After 1770, a steady increase in European visits brought new infections to Rapa Nui, which, owing to lack of immunity, decimated islanders. As on other Pacific islands, the forced enslavement of natives began around 1805 and climaxed in 1862-63, when two dozen Peruvian ships abducted about 1,500 people (half the surviving population) and sold them to work in Peru’s guano mines.

In 1888 Chile took possession of Rapa Nui, which it “hired out” to a Chile-based Scottish company to administer. With the entire island becoming a sheep ranch, the islanders became virtual slaves. Confined to a single village, they became virtual slaves of the company. Meanwhile overgrazing by sheep, goats and horses caused soil erosion and eliminated nearly all native vegetation.

A 1914 revolt was put down by the Chilean navy.

Postscript to film: In 2017, the Chilean government granted the Rapa Nui people the right to self-administer their ancestral island. The following year their governor lodged a new request for the British Museum to return their stolen moai. The Museum responded with an offer to loan it out on a temporary basis. See https://www.theguardian.com/world/2018/nov/20/easter-island-british-museum-return-moai-statue

*In the culture of Melanesians and Polynesians, mana is the spiritual life force and healing energy that permeates the universe.

1 thought on “The Hidden History of Rapa Nui (Easter Island)”