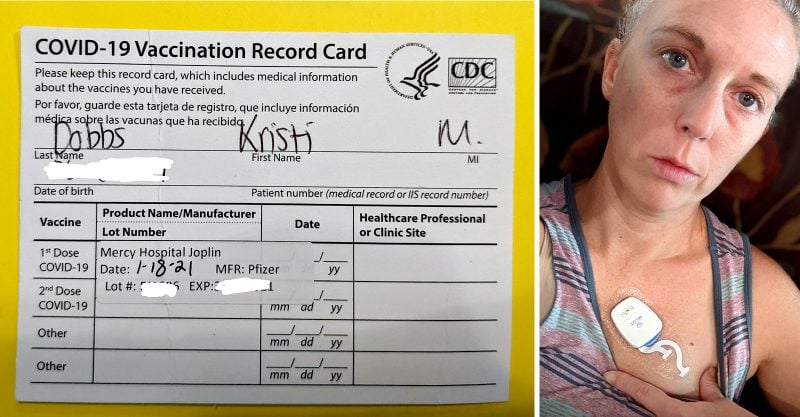 In an exclusive interview with The Defender, Kristi Dobbs recounted how she’s spent nine months pleading with health agencies to research the neurological injuries she developed after Pfizer’s vaccine, and how she and others are trying to get the word out about the vaccine’s potential risks.

Kristi Dobbs, a 40-year-old dental hygienist from Missouri, said she can no longer work after being injured by Pfizer’s COVID vaccine. She has spent the past nine months pleading with U.S. health agencies to research the neurological injuries she and others are experiencing in hopes of finding a treatment.

But the story never ran because, according to the reporter, a “higher up” at Pfizer pressured the news agency to drop it.

Dobbs got her first and only dose of Pfizer’s vaccine on Jan. 18. She immediately experienced an adverse reaction on-site at the hospital clinic where her vaccine was administered.

“I had barely sat down in the monitoring area after the inoculation and felt an odd tingling sensation running down my left arm, where I had just received the jab,” Dobbs wrote. “I immediately had a pre-syncope episode, where I thought I was going to pass out, heart palpitations, increased pulse, increased respirations and a blood pressure spike that was within a stroke-worthy reading.”

Dobbs was monitored for an additional 45 minutes. When her blood pressure dropped to a manageable range, she was released.

Dobbs said the people monitoring her brushed off her symptoms as a panic attack or hot flash. But she had never been afraid of vaccines, blood draws or needles. “I gave injections in the mouth as a hygienist, so it was no big deal to me,” Dobbs said.

Three days later, Dobbs woke up in the middle of the night and thought her whole bed was shaking, but her husband said he didn’t feel it. She also noticed shaking and trembling in her left hand, but thought maybe it was due to having coffee.

The next day, Dobbs felt a stabbing pain in her left scapula, and shaking and trembling sensations in both hands. As each day progressed, her symptoms worsened. “By day 10, I was in excruciating pain,” Dobbs said.

On Jan. 28, Dobbs went to a chiropractor in St. Louis to see what was causing the stabbing pain in her scapula and the radiating pain and tremors in both arms. The chiropractor thought she had a rib out, so he adjusted her.

The next morning Dobbs woke up with extreme pain and tremors throughout her entire body.

“Urgent care doctor thinks I am having muscle spasms, and thinks I am stressed because of my mother in law [who was battling cancer] and traveling so much, so he [prescribed] Flexeril and Medrol dose pack.”

On Feb. 1, Dobbs visited a local chiropractor to see if she could help with the symptoms. As they were catching up, the chiropractor noticed Dobb’s tremors, body shakes and “super high” blood pressure.

“At this point I am having problems regulating my BP, and she knows that this is out of character for me. She asks me what I have done differently since I saw her last and I can’t think of anything, except the Pfizer vaccine.

“BINGO … That’s it, she says! She immediately stops and tells me that I need to get in to see my primary care provider.