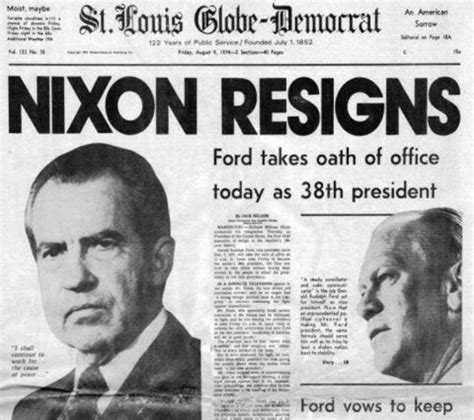 On July 17, 1974, four Republicans on the House Judiciary Committee joined the Democratic majority to call (27 to 11) for a full House vote to impeach Nixon. Initially intending to fight the impeachment, Nixon deferred to the Republican Party leadership. They were fearful impeachment proceedings would seriously jeopardize the outcome of the November 1974 elections.

Nixon resigned on August 9, 1974. Ford immediately assumed the presidency and pardoned him. The grand jury investigating the CIA role in Watergate was furious. In Chapter 11 of Family of Secrets (“Downing Nixon”), Russ Baker suggests the true purpose of the pardon was to prevent the truth about CIA involvement in the Watergate burglary and coverup from coming out in open court.

Baker also reveals that John Dean, who seems to have masterminded both the Watergate burglary and coverup,* served only four months (two months in a government safe house) on a obstruction of justice charge.

*See Was Nixon Set Up?  and Did John Dean Instigate the Watergate Coup?

The film can be viewed free at Kanopy