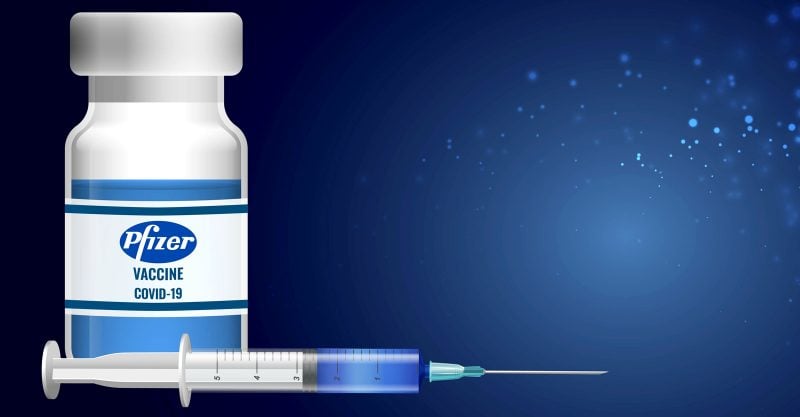 Critics said it was concerning that full approval was based on only six months’ worth of data — despite clinical trials designed for two years — and that there was no public discussion of the data.

This is the first COVID vaccine approved by the FDA, and is expected to open the door to more vaccine mandates by employers and universities.

The approval of Pfizer’s COVID vaccine was based on its clinical trial of 44,000 people — half of whom got the shots, the company said. The median six-month follow-up period for safety and efficacy began after participants received their second dose, Pfizer said.

Pfizer’s COVID vaccine received EUA on Dec. 11, 2020, for use in individuals 16 years and older. On May 10, the authorization was expanded to include 12- through 15-year-olds.

Pfizer’s vaccine will remain under EUA for 12- through 15-year-olds, and for a third dose in certain immunocompromised individuals.

Data released Friday by the Centers for Disease Control and Prevention (CDC) showed that between Dec. 14, 2020 and Aug. 13, 2021, a total of 326,535 adverse events had been reported to the Vaccine Adverse Events Reporting System (VAERS) attributed to Pfizer’s COVID vaccine, including 9,027 deaths and 56,607 serious injuries.

According to an article published Aug. 20 in the BMJ, transparency advocates have criticized the FDA decision not to hold a formal advisory committee meeting to discuss Pfizer’s application for full approval — an important mechanism used to scrutinize data.

Last year the FDA said it was “committed to use an advisory committee composed of independent experts to ensure deliberations about authorisation or licensure are transparent for the public.”

Kim Witczak, a drug safety advocate who serves as a consumer representative on the FDA’s Psychopharmacologic Drugs Advisory Committee, said the decision removed an important mechanism for scrutinizing the data.

“These public meetings are imperative in building trust and confidence especially when the vaccines came to market at lightning speed under emergency use authorization,” said Witczak. Wticzak was one of 27 experts who launched a citizen’s petition demanding the FDA “slow down and get the science right” before approving COVID vaccines.

“The public deserves a transparent process, especially as the call for boosters and mandates are rapidly increasing,” Wticzak said. “These meetings offer a platform where questions can be raised, problems tackled and data scrutinised in advance of an approval.”

Witczak said it’s concerning that full approval is based on only six months’ worth of data — despite clinical trials designed for two years — and there’s no control group after Pfizer offered the product to placebo participants before the trials were completed.

“They know they can’t win this argument on the science and that’s why they had to abolish the public process and independent oversight,” said Children’s Health Defense Chairman Robert F. Kennedy Jr. “They believe themselves so powerful now that they are stripping off all pretenses that this is about public health, and are baldly revealing the corruption.”

“This is a sinister scheme for mandating a badly flawed vaccine that has already made history with record deaths and injuries, that neither prevents disease nor transmission, and does not improve mortality. Pfizer’s most recent six-month data show that while the jab prevents some COVID deaths, it causes more heart attacks yielding a net loss of life.”

Diana Zuckerman, president of the National Center for Health Research, told The BMJ it’s obvious the FDA has no intention of hearing anyone else’s opinion, and says making decisions behind closed doors can feed vaccine hesitancy.

“It’s important to have a public discussion about what kind of data are there, and what the limitations are,” Zuckerman said.