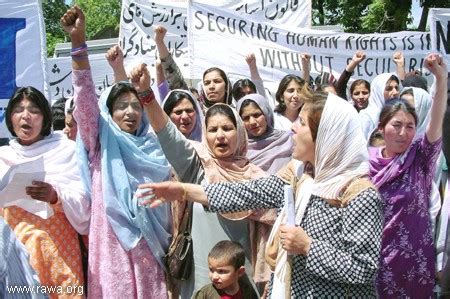 Afghan Women’s Mission has been in touch with RAWA to address their needs at this urgent time. In this brief Q&A with AWM Co-Director Sonali Kolhatkar, RAWA explains the unfolding situation on the ground as they see it. Click HERE to donate to RAWA now.

Sonali Kolhatkar: For years RAWA spoke out against the U.S. occupation and now that it has ended, the Taliban are back. Could President Biden have withdrawn U.S. forces in a manner that would have left Afghanistan in a safer situation than currently? Could he have done more to ensure the Taliban were not so quickly able to take over?

RAWA: In the past 20 years, one of our demands was an end to the US/NATO occupation and even better if they take their Islamic fundamentalists and technocrats with them and let our people decide their own fate. This occupation only resulted in bloodshed, destruction and chaos. They turned our country into the most corrupt, insecure, drug-mafia and dangerous place especially for women.

From the very beginning we could predict such an outcome. On the first days of the US occupation of Afghanistan, RAWA declared on October 11, 2001:

“The continuation of US attacks and the increase in the number of innocent civilian victims not only gives an excuse to the Taliban, but also will cause the empowerment of the fundamentalist forces in the region and even in the world.”

The main reason we were against this occupation was their backing of terrorism under the nice banner of “war on terror”. From the very first days when the Northern Alliance looters and killers were installed back into power in 2002 to the last so-called peace talks, deals and agreements in Doha and release of 5000 terrorists from prisons in 2020/21, it was very obvious that even the withdrawal won’t have a good end.

The Pentagon proves that none of the theory invasion or meddling ended up in safe condition. All imperialist powers invade countries for their own strategic, political and financial interests but through lies and the powerful corporate media try to hide their real motive and agenda.

It is a joke to say values like “women’s rights”, “democracy”, “nation-building” etc. were part of the US/NATO aims in Afghanistan! US was in Afghanistan to turn region into instability and terrorism to encircling the rival powers especially China and Russia and undermining their economies via regional wars. But of course the US government did not want such a disastrous, disgraceful and embarrassing exit that left behind such a commotion that they were forced to send troops again in 48 hours to control the airport and safely evacuate its diplomats and staff.

We believe the US left Afghanistan out of its own weaknesses not defeated by its creatures (Taliban). There are two significant reasons for this withdrawal.

The main reason is the multifold internal crisis in the US. The signs of the US system decline was seen in the weak response to Covid-19 pandemic, attack on Capitol Hill and the great protests of the US public in the past few years. The policy-makers were forced to withdraw troops to focus on internal burning issues.

The second reason is that the Afghan war was an exceptionally expensive war whose cost has gone into trillions, all taken from taxpayer money. This put such a heavy dent on the US financially that it had to leave Afghanistan.

The war-mongering policies prove that their aim was never to make Afghanistan safer, let alone now when they are leaving. Furthermore, they also knew that the withdrawal would be chaotic yet they still went ahead and did it. Now Afghanistan is in the limelight again due to the Taliban being in power but this has been the situation for the past 20 years and everyday hundreds of our people were killed and our country destroyed, it just was rarely reported in the media.

Sonali Kolhatkar: The Taliban leadership are saying they will respect women’s rights as long as it complies with Islamic law. Some Western media are painting this in a positive light. Didn’t the Taliban say the same thing 20 years ago? Do you think there is any change in their attitude toward human rights and women’s rights?

RAWA: The corporate media is only trying to put salt on our devastated people’s wounds; they should be ashamed of themselves the way they try to sugarcoat brutal Taliban. The Taliban spokesperson declared that there is no difference between their ideology of 1996 and today. And what they say about women’s rights is the exact phrases used during their previous dark rule: implementing Sharia law.