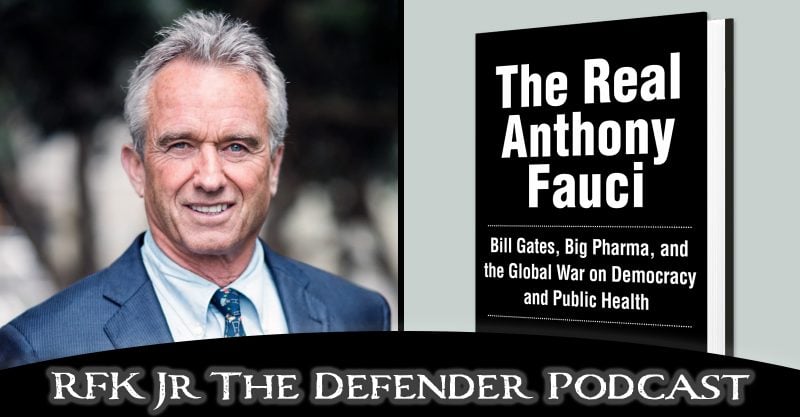 On the “RFK Jr. The Defender Podcast,” Robert F. Kennedy, Jr. shares details about his new book, “The Real Anthony Fauci: Bill Gates, Big Pharma, and the Global War on Democracy and Public Health,” with Robyn Openshaw, author and founder of GreenSmoothieGirl. The book, which will be released Nov. 9, is now available for pre-order.

In his upcoming book, “The Real Anthony Fauci: Bill Gates, Big Pharma, and the Global War on Democracy and Public Health,” Children’s Health Defense Chairman Robert F. Kennedy, Jr. gives a provocative exposé of the true Anthony Fauci, and how he used U.S. public health agencies to fund dangerous gain-of-function research that can be used to create bioweapons.

In an interview on the “RFK Jr. The Defender Podcast,” Kennedy and Robyn Openshaw, author and founder of GreenSmoothieGirl, discuss the Nov. 9 release of Kennedy’s new book, and how pre-ordering a copy today will help break through the censorship and support Children’s Health Defense, which will receive 100% of proceeds from the book sales.

Kennedy and Openshaw discuss at length the ties — and the implications of those tie —  between the National Institute of Allergy and Infectious Diseases (NIAID), headed by Fauci, and the military, which provides substantial funding to NIAID.

The two also discuss how Fauci has played a key role in “agency capture,” said Kennedy, which is the pharmaceutical industry’s coup d’état against democracy. Kennedy explained how NIAID is one of 24 agencies in the U.S. Department of Health and Human Services that’s been subject to industry capture.

“That is when the agency becomes the sock puppet for the industry it’s supposed to regulate. It’s a dynamic that happens with almost every regulatory agency. With public health agencies we see agency capture on steroids. That’s because the agency is really part of the industry.”

Nearly half of the Centers for Disease Control and Prevention’s budget comes from buying, selling or distributing vaccines, said Kennedy. “It’s the biggest vaccine distributor in the country.”