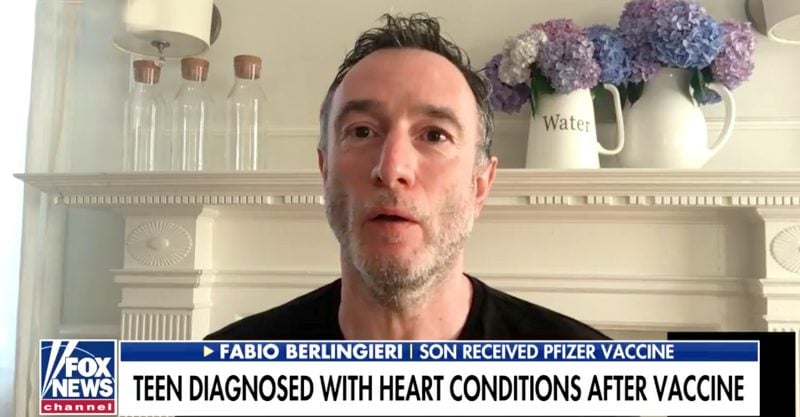 A 17-year-old student, who recovered from COVID but was required to get the vaccine in order to attend school and play soccer, developed a heart condition soon after getting the Pfizer vaccine.

A 17-year-old student developed symptoms of a heart condition about one week after his first dose of Pfizer’s COVID vaccine and was subsequently diagnosed with a heart condition, his father said Tuesday on “Fox & Friends.”

The teen already had COVID and recovered, but was required to get the vaccine in order to play soccer.

The teen’s father, Fabio Berlingieri, said his son was vaccinated on June 15, and about a week later started complaining that “his heart was hurting every time he had a heartbeat.”

At first, Berlingieri thought his son had pulled a muscle playing sports. But when the symptoms persisted, he took him to a walk-in clinic. Doctors gave the teen an EKG, and found nothing wrong, but recommended he see a cardiologist the next day. The cardiologist did a sonogram, which again turned up nothing, then ran some bloodwork.

Berlingieri said they were told it would be two or three days before they got results from the bloodwork. When they did, it was “bad news.”

“They called and said ‘your son has to get to the emergency room today,’” Berlingieri said. “I said today’s his prom, can he go later? They said, ‘no, he has to go now.’”

His son’s troponin levels were “off the charts,” Berlingieri explained, adding that his son was hospitalized for a couple of days.

Berlinigieri’s son missed his prom and now can’t do “all the things he loves to do,” including playing soccer in the fall and surfing. The last cardiologist check-in showed that his “EKG was a little off.”

“What happened, I guess, is the oxygen doesn’t get in those areas,” Berlingieri said. “So it has to heal. So he has to be very careful that he doesn’t do anything strenuous so his heart rate doesn’t increase and [put him in] danger of a heart attack.”

4 thoughts on “Dad: My Son’s School Made Him Get COVID Vaccine, Now He Has Heart Condition”