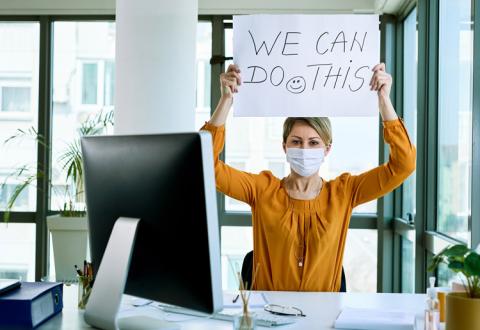 In the past couple of months, our esteemed public health experts have had a rough go of defending the supposedly settled science behind lockdowns and mask mandates.

White House covid-19 advisor Andy Slavitt was first on the chopping block back in mid-February, when he was reduced to parroting empty platitudes about social distancing after failing to explain why a completely open Florida had numbers no worse than a strictly locked-down California. Then comes media darling Dr. Anthony Fauci, who has had a particularly embarrassing series of public appearances of late. During a recent MSNBC interview Fauci expressed confusion and wasn’t “quite sure” as to why Texas was experiencing falling cases and deaths an entire month after lifting its mask mandates and capacity restrictions. Moreover, during a hearing with Representative Jim Jordan, Fauci completely dodged Jordan’s question of why Texas has lower case rates than some of the most notable lockdown states. Fauci, refusing to answer the question, simply responded that having a lockdown is not the same thing as obeying lockdowns. Fauci was correct here, but he indirectly claimed that citizens of New York and New Jersey, two notorious lockdown states, were complying less with mitigation measures than a state that had, and still has, practically none. A quick check of Google’s covid-19 mobility reports lays this counterintuitive claim to rest.

When governments and media outlets around the world have successfully captured audiences by stoking fear of covid-19, the data that should so easily assuage this fear become irrelevant, and interviews like those mentioned above are simply brushed aside in favor of a fear-born allegiance to the “morally superior” government-mandated lockdowns, curfews, mask mandates, and more. This “scared straight” approach, as Bill Maher correctly described it, is the state’s bludgeon of compliance.

As far as scaring citizens straight, Project Veritas has released footage showing CNN employees explaining how the network plays up the covid-19 death toll to drive numbers. Especially disgraceful was CNN technical director Charlie Chester’s admission that the network doesn’t like to report recovery rates because “[t]hat’s not scary…. If it bleeds it leads.”

CNN isn’t alone in the fearmongering business. Thanks to the surplus of United States media outlets willing to churn up a disproportionate amount of negative covid-19 headlines—roughly 90 percent of covid-19 news in the United States is negative compared to 51 percent internationally—is it any surprise that nearly 70 percent of Democrats, 51 percent of Republicans, and almost 50 percent of independents think the chances of being hospitalized with covid-19 range anywhere from 20 percent to over 50 percent?

Government- and media-induced panic have blinded us to the data, which for the past thirteen months have consistently shown zero correlation between the timing, strength, and duration of mitigation measures and covid-19 incidence. Nowhere could this lack of correlation be more prevalent than among lockdowns and mask usage.

Looking at the United States, we can address the widely believed notion that states with more intense lockdowns will see fewer covid-19 deaths by plotting each state’s average restriction ranking over the past thirteen months against the total number of covid-19 deaths for each state. To get the average ranking, the author averaged data from Oxford University’s Blavatnik School of Government—this source ranked each state by the average time spent at a stringency index measure greater than sixty up until mid-December 2020—and WalletHub, which also ranked each state by stringency using a weighted average of various measures from January 2021 onward. Now, if the past year’s worth of sanctimonious lectures from public health experts have any scientific weight behind them, we should see a very strong negative correlation between the intensity of states’ restrictions and total covid-19 deaths.

2 thoughts on “Why Is There No Correlation Between Masks, Lockdowns, and Covid Suppression?”