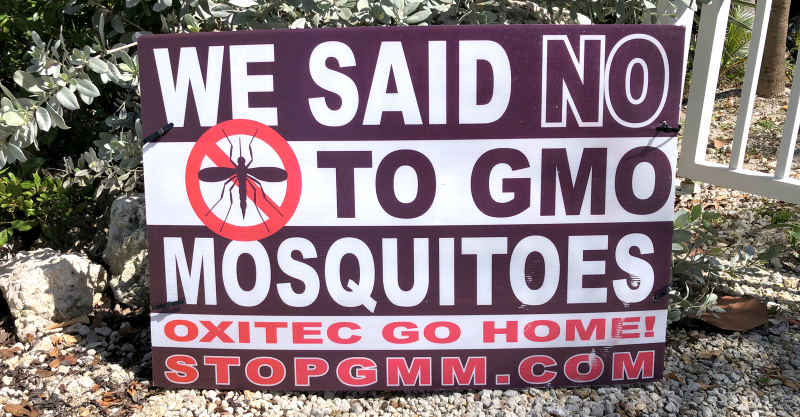 Biotech firm Oxitec plans to release genetically modified mosquitoes in the Florida Keys to combat dengue fever, but critics raise concerns about the impact on human health and the environment.

This spring, the biotechnology company Oxitec plans to release genetically modified (GM) mosquitoes in the Florida Keys. Oxitec says its technology will combat dengue fever, a potentially life-threatening disease, and other mosquito-borne viruses — such as Zika — mainly transmitted by the Aedes aegypti mosquito.

While there have been more than 7,300 dengue cases reported in the U.S. between 2010 and 2020, a majority are contracted in Asia and the Caribbean, according to the U.S. Centers for Disease Control and Prevention. In Florida, however, there were 41 travel-related cases in 2020, compared with 71 cases that were transmitted locally.

Native mosquitoes in Florida are increasingly resistant to the most common form of control — insecticide — and scientists say they need new and better techniques to control the insects and the diseases they carry. “There aren’t any other tools that we have. Mosquito nets don’t work. Vaccines are under development but need to be fully efficacious,” says Michael Bonsall, a mathematical biologist at the University of Oxford, who is not affiliated with Oxitec but has collaborated with the company in the past, and who worked with the World Health Organization to produce a GM mosquito-testing framework.

Bonsall and other scientists think a combination of approaches is essential to reducing the burden of diseases — and that, maybe, newer ideas like GM mosquitoes should be added to the mix. Oxitec’s mosquitoes, for instance, are genetically altered to pass what the company calls “self-limiting” genes to their offspring; when released GM males breed with wild female mosquitoes, the resulting generation does not survive into adulthood, reducing the overall population.

But Oxitec has been proposing to experimentally release GM mosquitoes in the Keys since 2011, and the plan has long been met with suspicion among locals and debate among scientists. Some locals say they fear being guinea pigs. Critics say they are concerned about the possible effects GM mosquitoes could have on human health and the environment. In 2012, the Key West City Commission objected to Oxitec’s plan; in a non-binding referendum four years later, residents of Key Haven — where the mosquitoes would have been released — rejected it, while residents in the surrounding county voted in support of the release. With the decision left up to the Florida Keys Mosquito Control District, officials approved the trial to be conducted elsewhere in the Keys.