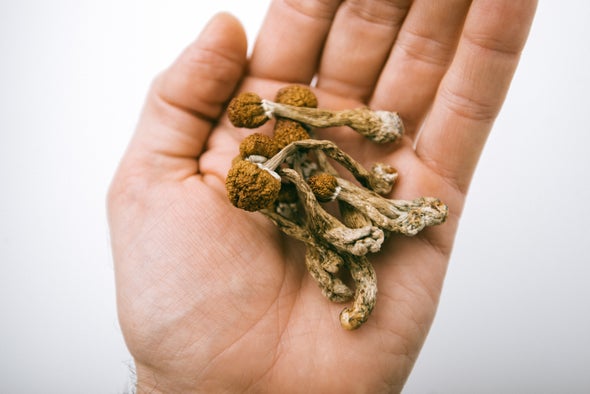 Psilocybin Therapy May Work as Well as Common Antidepressant

For the first time, a randomized controlled trial shows the psychedelic offers potent, if short-term, relief in comparison with an SSRI

Psilocybin, the active ingredient in “magic mushrooms,” may provide relief from depression symptoms that is equivalent to, or better than, an SSRI antidepressant. Credit: Getty Images

The first randomized controlled trial to compare the illicit psychedelic psilocybin with a conventional selective serotonin reuptake inhibitor (SSRI) antidepressant found that the former improved symptoms of depression just as well on an established metric—and had fewer side effects. The study was fairly small, however, and was not explicitly intended to show how well the drugs stacked up on other measures of well-being.

In a study published on Thursday in the New England Journal of Medicine,psychiatrist David Nutt, psychologist Robin Carhart-Harris and other researchers, all then at Imperial College London, conducted a six-week trial of 59 participants split into two groups. One group was given a full dose of psilocybin (the active ingredient in “magic mushrooms”) in combination with psychotherapy. The other received daily amounts of the SSRI escitalopram plus two minuscule amounts of psilocybin with psychotherapy. All of the participants suffered from major depressive disorder (MDD), which affects roughly 10 percent of the U.S. population in a given year.

Psilocybin Therapy May Work as Well as Common Antidepressant – By Zoe Cormier on April 15, 2021 — Just Sayin’