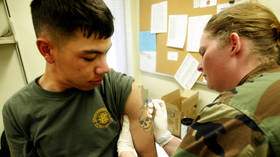 Just shy of 40 percent of Marine Corps service members have refused to take the coronavirus jab, new data provided to the media shows. The revelation comes as Democratic lawmakers push to make the vaccine mandatory for soldiers.

Some 75,500 Marines have agreed to be vaccinated as of Thursday, while around 48,000 have declined the inoculation, CNN reported, citing numbers provided by the branch. That puts the rejection rate at 38.9%, slightly higher than the 33% rate for the whole military given by defense officials.