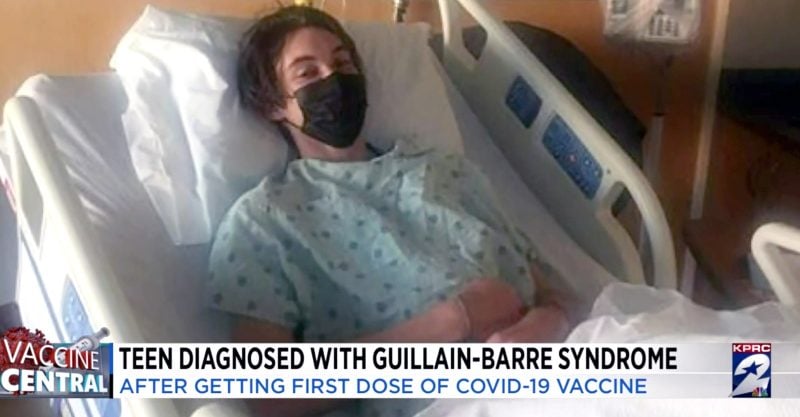 The previously healthy teenager said he believes the vaccine caused him to develop the rare neurological disorder, but doctors said it could just be a coincidence.

A Texas teenager diagnosed with Guillain-Barré syndrome (GBS) a few weeks after his first dose of the COVID-19 vaccine said he believes the vaccine is to blame, according to a local Houston news channel KPRC2 report.

“I wanted to get the vaccine,” said Wyatt McGlaun, a high school senior from The Woodlands. “I felt it was the right thing to do. I wanted to travel and enjoy my last summer before college.”

A few weeks after receiving the vaccine, McGlaun became weak and had difficulty walking. He was admitted to CHI St. Luke’s Health where he was diagnosed with GBS.

According to Mayo Clinic, GBS is a rare disorder in which the body’s immune system attacks its nerves. Initial symptoms include weakness and tingling in the extremities which can quickly spread, eventually paralyzing the whole body. Most people with the condition must be hospitalized to receive treatment.

People with GBS usually experience their most significant weakness within two weeks after symptoms begin.

According to the National Institute of Health, one case of GBS was reported in February in an 82-year-old woman who had one dose of Pfizer’s COVID vaccine.

According to data from the Vaccine Adverse Events Reporting System (VAERS), there have been 70 reported cases of GBS after having received a COVID vaccine with 59% occurring with Pfizer, 44% with Moderna and 3% with Johnson & Johnson (J&J).