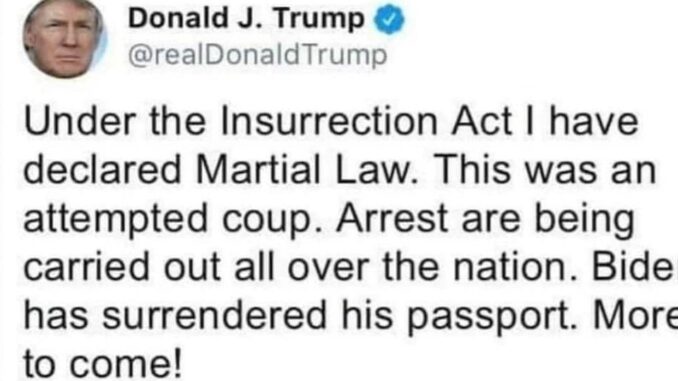 We have come into possession of an apparent Tweet made by President Donald J. Trump on December 18, 2020 at 6:24 A.M. announcing the President has declared Martial Law under the Insurrection Act.

The Tweet said, “Under the Insurrection Act I have declared Martial Law. This was an attempted coup. Arrests are being carried out all over the nation. Biden has surrendered his passport. More to come”.

These seditious and treasonous actions by Twitter complicate the decision-making-process regarding publication of such information.

We cannot yet confirm or deny whether or not the Tweet was actually made by the President.

However, we have received credible intelligence reports that support the assertions made in the alleged Tweet are going to, in fact and reality, happen.

Therefore, as a matter of public safety we are publishing the unconfirmed Tweet.

We continue to investigate this matter.