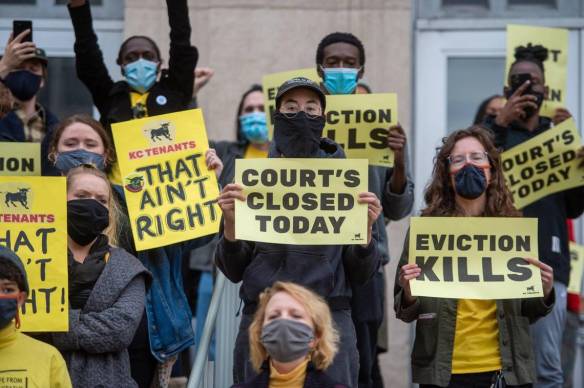 Kansas City tenants chained themselves to the doors of the Jackson County Courthouse downtown Thursday morning and shut down virtual eviction proceedings with online disruptions.

The protest, organized by KC Tenants, drew about 100 people, who held signs saying “eviction kills” and “court’s closed today.” They called on Jackson County Circuit Court Presiding Judge David Byrn to halt the hearings. For months, KC Tenants has been pushing Byrn to reestablish an eviction moratorium to keep residents in their homes during the coronavirus pandemic and associated economic crisis.

Ashley Johnson of Kansas City was due in court Thursday for her second eviction case this fall, but she refused to go in.

Johnson won a previous eviction trial in September after her landlord took the appliances out of her home near 39th Street and Cleveland Avenue and refused to provide utility service. According to the court judgment, the landlord admitted at trial that she did not own the home and was no longer the legal landlord.

Now, Johnson, who lost work earlier this year because of COVID-19, is facing eviction again at that same home, though she’s now staying at an Airbnb. She and others risked arrest to attend the protest Thursday.

Johnson said it was her daughter’s first birthday, and she should be celebrating.

For now, Johnson is receiving help for her Airbnb from an aid fund KC Tenants created. She said it was important to use her voice to help others. The volume of evictions scheduled for Thursday, she said, was “overwhelming.”

Inside the courthouse, judges attempted to hold eviction hearings, but protesters called in to disrupt and shut down proceedings being handled virtually. They read from a script, oftentimes speaking over one another.

“Tenants on the line, this is not your fault,” a voice said. “You deserve a decent home. You deserve shelter during a pandemic. You are not alone. KC Tenants has your back.”

The protesters told each judge, “You’re complicit with every eviction you hear.”

Judge Jessica Agnelly postponed cases for a later date, saying that if disruptions continue, she would have to do the hearings in person. She ended the conference call.

Judge Mary Weir told the protesters online that the people had a right to have their cases heard. Despite disruptions, Weir set one case for trial in early December. She tried to move on with her docket, but the disruptions continued.

“Judge, we can’t hear you,” one person said. Others complained that they couldn’t hear if their names were being called.

Eventually, Weir said that because of the disruptions, no one would be allowed to appear via teleconference and that they will have to appear in person. Notices would be mailed. She too ended the conference call […]

2 thoughts on “Tenants Block Jackson County Courthouse, Shut Down Much of Eviction Docket”