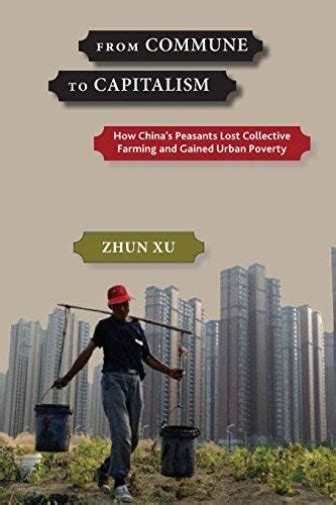 The purpose of this book is to dispel common Chinese Communist Party (CCP) myths about the rapid privatization of Chinese collective farms following Mao Tse Tung’s death in 1976. For me, the most interesting section concerns Mao’s decision to collectivize Chinese agriculture (which occurred more than nine years after he assumed power in 1949). It becomes clear that throughout his tenure as president, Mao was in constant conflict with a strong anti-socialist faction of the CCP that supported full adoption of capitalism in China. Prior to reading this book, I had no idea that Mao’s disastrous Cultural Revolution (1966-1976) was a last ditch effort to rid his government of his pro-capitalist enemies. Following Mao’s death, his pro-capitalist successor Deng Xiaoping lost no time in privatizing all China’s collective farms and industry.

Xu mainly focuses on three common myths promoted by the current CCP. The first myth is that Chinese collective farms suffered from gross inefficiency and that productivity improved when collectives were dissolved and replaced with small family farms. The second myth blames this inefficiency on laziness and work avoidance, which the CCP alleges was common on collective farms. The third maintains that rural peasants initiated decollectivization spontaneously from the grassroots because they were dissatisfied with collective farming.

Myth 1: Citing detailed crop records and peasant interviews, Xu makes a compelling case that productivity declined significantly following the neoliberal* reforms (including decollectivization) the CCP implemented in the 1980s. The economic advantage of collective agriculture of small privately held family plots is that it enable rural peasants to pool their resources to mechanize their farms, set up irrigation schemes and invest in high yield hybrid crops and chemical fertilizers. Many small farmers lost access to machines and irrigation schemes following decollectivization. In fact many were left landless when cadres* and party bureaucrats seized the best land for themselves. Peasants who were left landless were forced to migrate to the cities, where they contributed to a large surplus labor pool. The latter put great pressure on urban workers who resisted privatization of state-owned industries. At present, the CCP is seeking to increase agricultural productivity by consolidating remaining family farms into large industrial scale land holdings (ie driving even more peasants off their land).

Myth 2: Work avoidance was relatively rare under Chinese collective farming, except where there was significant “stratification.” Most collectives employed a system in which members’ reimbursement was directly linked to the number of work points they accumulated. However in “stratified” collectives, the cadres running the farm abused their authority (by shirking work themselves, trading cushy work assignments for sexual favors, and punishing personal enemies with heavier work duties). This drastically impacted morale and initiative of many of the peasants under them.

Myth 3: Evidence is clear from the interviews Xu conducted that decollectivization was forcibly imposed by the CCP. Xu estimates that 30% of rural peasants supported privatization of the collectives, 30% strongly opposed it, and 40% were indifferent.

The good new is that China is having the same reaction to the failures of neoliberalism as the rest of the world (eg extreme poverty and inequality). Xu describes a renewed interest in Marxism in Chinese academic and activist circles.

**The Cadres were officials appointed by the CCP to run the collective farms, either because of their role in the Revolution or strong links to party officials.