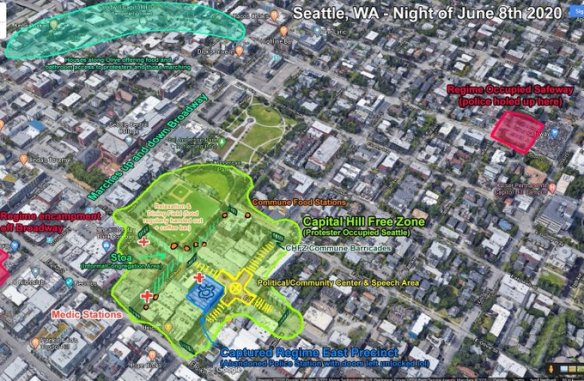 As protests continue for a third week in the aftermath of George Floyd’s murder, calls for racial justice have come to include another, less-understood demand: defund the police. And it’s already working — in Minneapolis, a veto-proof majority of the city council voted to disband the police, following the city school board‘s move to pull all officers out of its educational institutions. Los Angeles soon followed and vowed to reduce the city’s multi-billion dollar budget by $150 million, and New York City is also considering cuts to its massive police budget.

But is it possible to live in a world without police? Skeptics wonder who would keep the pace and ensure public safety if there are no officers to deploy. But in Seattle, a movement called Free Capitol Hill is in the early days of demonstrating what it looks like to live in an interdependent, police-free society.

The region, known as Capitol Hill Autonomous Zone (named Capitol Hill for the Seattle neighborhood it’s located in), has been functional since late Monday evening, when Seattle’s police chief Carmen Best ordered that officers vacate Seattle’s East Precinct building and board it up. Protesters spray-painted over the precinct’s sign, changing it to read “PEOPLE DEPARTMENT” — an announcement of the region’s new stewards. Instead of heading home, protesters just stayed, building out the perimeter of the Capitol Hill Autonomous Zone from the precinct using former police barricades.

The Capitol Hill Autonomous Zone (CHAZ for short) is an evolving practice of independence and interdependence, says JJ (who declined to provide her last name), a member of Salish Black Flag, an antifascist anarchist collective based in the area. There’s no formal assignment of responsibilities or election process to determine leadership roles, which right now are mostly filled by Black and brown folks. Instead, people just step in where they’re needed, based on the skills they already have. For instance, a mental health station located near Cal Anderson Park is staffed by social workers, practicing therapists, and those with degrees in psychology, providing what JJ says would usually be a “fee-based service” for free.

As you enter the Capitol Hill Autonomous Zone, a sign greets you saying, “You are now leaving the USA.” For Oliver Miska, a teacher in the area, the Autonomous Zone represents “the most beautiful forms of peace and love and mutual aid, art, expression, [and] public discourse.”

JJ says that incidences of violence or disruption have been minimal, and anyway CHAZ practices what it preaches in that police are not called upon to preserve safety and peace. One evening this past week, a belligerently drunk man was yelling sexist and racist slurs to those around him. Quickly, CHAZ’s security team — veterans, lawyers, social workers, and emergency medical technicians — surrounded the man, walked him home, and took down his contact information so they could check on him the next day […]