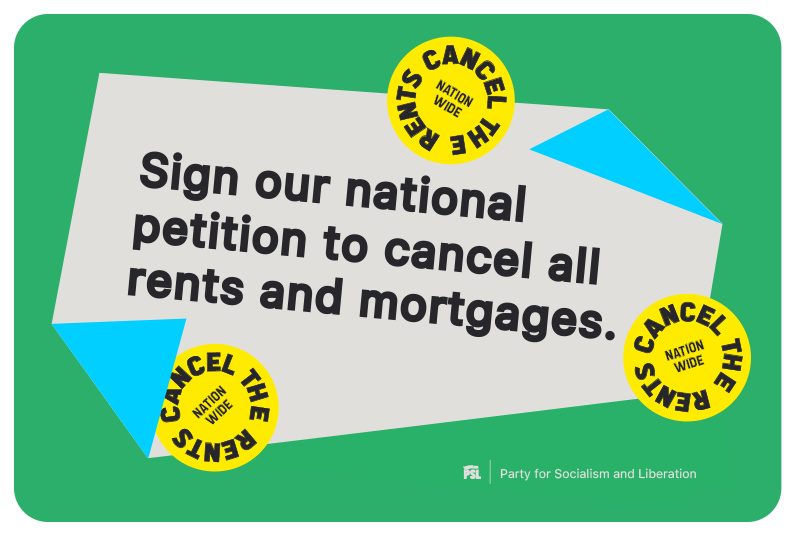 Join this movement! On Saturday, April 25th cities and towns around the country will mobilize to demand: A national cancellation of all rents, mortgages for homeowners, small landlords and small businesses, for the duration of the Pandemic.

The patchwork of city and state moratoriums on evictions are not enough. In a few months when these moratoriums are lifted and the rents come due — we will still not have the money! Join thousands of people across the country in car caravan protests on Saturday, April 25 to demand the cancellation of rent and all debts to landlords for the duration of the pandemic. Protesters will adhere to social distancing guidelines and requirements, including wearing masks, that have been established to respond to the Coronavirus outbreak.

The economy is virtually shut down as it must be to save lives. But massive testing and personal protective equipment are still not available, despite the great productive capacity of the United States.

In December 2019, when COVID-19 presented in China, the United States was warned that we would be affected. Instead of using the next two months to prepare, Trump and the U.S. government ignored public health experts, even ridiculing them. Now, due to this lack of preparedness, the United States has become the epicenter of the pandemic.

The effect on the people is devastating. At least 37,000 people in the United States have died and more than 650,000 are ill. There is no end to the health and economic crisis in the near future. 22 million people have lost their jobs in just one month, 15 times the previous record of 1982, and more jobless to come […]