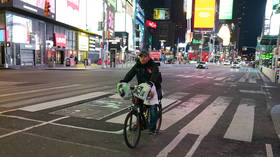 Poorer Americans are more likely to have lost their job or be forced to work as usual amid the coronavirus epidemic. But those in the upper classes can work remotely while stressing out about the crisis.

At least that’s the indication of an Axios/Ipsos poll about the working status and emotional wellbeing of people in the US. Almost half of upper middle class Americans have switched to working from home amid the health crisis. The same is true for 39 percent of the upper class.

In contrast, only three percent of lower economic strata had the same luxury. Between 26 and 34 percent of lower-to-middle class Americans are working the same way as they did before the outbreak, exposing themselves to a greater risk of being infected. And 15 to 20 percent have lost their jobs.

But the Americans who are better off tend to be more upset about the situation than their economically struggling compatriots, according to the poll. Almost half of the rich (47 percent) said their emotional well-being has gotten worse, compared to 34 percent on the other side of the socioeconomic scale […]