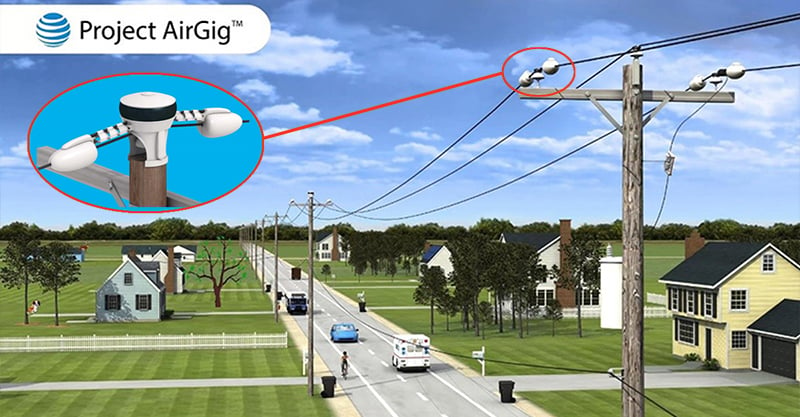 AirGig is a new technology developed by AT&T to transfer Wi-Fi and wireless data over power lines using 4G LTE and 5G millimeter waves. To date, AT&T has submitted over 500 patents and applications related to the AirGig technology, which turns existing power lines into transmitters. According to AT&T’s glowing press releases, AirGig could even replace cell towers:

We hope that one day there will be no need to build new towers or bury new cables in locations close to aerial power lines. Instead, using AirGig patented technology, we would install devices to provide high speed broadband which can be clamped on by trained electrical workers in just a few minutes.

The AirGig technology aims to provide “ultra-fast” broadband Wi-Fi anywhere there are power lines, offering “last-mile wireless connectivity” without the need for deployment of any new fiber-to-the-home. As “last-mile” suggests, AT&T is framing its AirGig technology as a solution for extending wireless access to virtually everyone on the planet. The company writes:

Project AirGig has opened the door to the possibility of broadband internet connectivity for nearly everyone currently served by an electric utility. It’s a first-of-its-kind technology that is expected to deliver broadband connectivity to homes and mobile devices wherever there are power lines—whether urban, rural or underserved parts of the world.

What AT&T does not spell out in its glossy communications is that AirGig will make it impossible to escape exposure to wireless radiation, even in our homes. AirGig will saturate our environment—every inch of it—with close-proximity, high-intensity radiation. The few relatively safer areas that still exist will quickly disappear. Not only will those who already have become sick from wireless radiation have nowhere to escape to, but many more are likely to experience immediate health impacts.

One of the AirGig selling points being promoted by AT&T is collaboration with utility companies “as they evolve toward the ‘smart grid’” and the rollout of so-called “smart cities.” In fact, in December 2017, AT&T announced that it was starting to test AirGig in rural and suburban Georgia in collaboration with the state’s utility, Georgia Power. (AT&T also announced a second field test site in an undisclosed location outside the U.S.)

Since that announcement two years ago, AT&T has been relatively quiet about AirGig’s progress. In September 2018, however, the company summarized results from its Georgia trial run as “encouraging” and announced its intention to expand the technology’s field trials […]

2 thoughts on “5G AirGig: What Is It and Should You Be Worried”