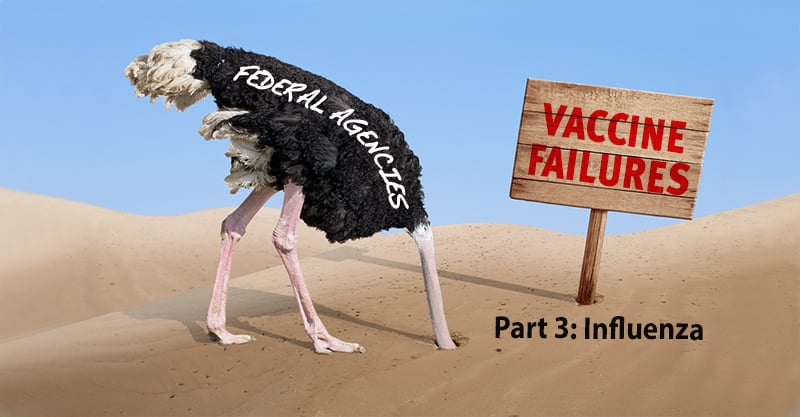 [Note: This is the third in a series of articles examining the serious problem of vaccine failure—a problem that, scandalously, remains unacknowledged by the public health officials and politicians promoting draconian vaccine mandates. Previous articles examined measles and pertussis vaccination.]

Each year, U.S. public health officials and their media partners renew the campaign to sell the entire country (including pregnant women, six-month-olds and fragile senior citizens) on the need for and benefits of flu vaccines. Ordinarily, to persuade the public that a given vaccine is beneficial, officials must show that it is effective—in other words, that it is able to “prevent outcomes of interest in the ‘real world.’” However, influenza vaccination’s infamous ineffectiveness makes this talking point a bit tricky. And when vaccination does not “significantly reduce medically attended influenza illness,” it is hard to avoid the conclusion that the vaccine has bombed.

As public health experts are well aware, many factors can lessen influenza vaccine effectiveness (VE), including particular characteristics of vaccine recipients and the vaccines themselves. The scientific literature also points to serious wrinkles that underscore influenza vaccination’s inability to deliver meaningful benefits and its propensity to create new problems. For example, studies show that getting flu vaccines year after year reduces the level of vaccine protection available; flu-vaccinated individuals are also more susceptible to other strains of influenza and severe respiratory infections. Recent studies even suggest that childhood influenza vaccination can lead to larger epidemics and “an overall health loss.” A vaccine expert who recently admitted to knowing less about influenza today than a decade ago lamented, “It’s much more complicated than we thought.”

Failure #1: Influenza vaccination has been 40%-90% ineffective over the past 15 years.

More so than with other vaccines, researchers view influenza viruses as “dynamic” and influenza VE as a “moving target.” These characteristics have thwarted efforts to develop effective vaccines, with dramatic seasonal fluctuations in VE being the inevitable result. Under such circumstances, influenza vaccines theoretically will be most effective when manufacturers correctly guess which strains of virus to include in a given year’s vaccines. In practice, however, influenza vaccines also “stand out for their variable effectiveness by age group . . . and by recent vaccination status,” suggesting an important role for immune history as well.

Illustrating the “complex host-virus interactions that affect vaccine protection,” some researchers hypothesize that imprinting—how a person’s first influenza infection “shap[es] immune memory . . . over the individual’s lifetime”—may play a key role in subsequent infection risks. Proponents of this hypothesis point to a study showing that vaccination tampered with protective childhood imprinting in a cohort of 35–54-year-olds; vaccinated individuals in that age group had a more than four-fold increased risk of illness from certain circulating influenza viruses compared with same-age unvaccinated individuals.

In another example of how immune factors influence VE, studies show that obese individuals have a decreased response to seasonal flu vaccines compared with non-obese individuals. Researchers explain this by noting that overweight introduces changes in metabolism that alter and age immune system cells; one researcher says that a 30-year-old obese person’s immune cells look “a lot like what you might expect in an 80-year-old individual.”

A 2020 study published by Canadian researchers assesses the impact of repeated influenza vaccination on “current season” VE, furnishing results that will hardly be good news for proponents of annual vaccination. The study included senior citizens with laboratory-confirmed influenza who were at least 65 years old at the time of vaccination, examining the impact of prior vaccination for up to 10 previous flu seasons—the first study to review such a long time period. In seniors who received a vaccine in 2015-16 but none in the preceding decade, VE was an unimpressive 34%, but it was significantly worse when accounting for 10-year vaccination history—26%, 24%, 13% and 7% in those who received 1-3, 4-6, 7-8 or 9-10 vaccines in the prior decade, respectively. A Spanish study of older (> 60 years) influenza patients documented low VE (20% or lower) with just one prior vaccination.

What about at the younger end of the age continuum? The authors of a 2017 meta-analysis point out that, based on average life expectancy and current vaccine recommendations, a child born in 2017 can “expect to receive 70-80 annual influenza vaccinations” over the course of his or her lifetime—but the effects of so many annual vaccines “on individual long-term protection, population immunity, and virus evolution remain largely unknown.” Another researcher—commenting on why influenza vaccines so often fail—remarks that flu vaccination programs are “predicated on assumptions on top of assumptions.”

The authors of the 2017 meta-analysis note that “signals of concern regarding potential negative effects of repeated vaccination” are nothing new, having first been observed in the 1970s and 1980s. In their conclusions, not only do these authors argue that repeated vaccination “blunts” the antibody response—particularly for the H3N2 influenza viruses that caused U.S. vaccine effectiveness to plummet in 2019—but that the long-term immune effects of “blocking natural infection in healthy individuals with a low risk of influenza complications are unknown.” Their take-home message, again, is hardly reassuring:

In the aftermath of the 2009 influenza A (H1N1) pandemic, two Canadian researchers reported a more than two-fold increased risk of H1N1 illness in individuals less than 50 years who had received a 2008 seasonal flu vaccine […]