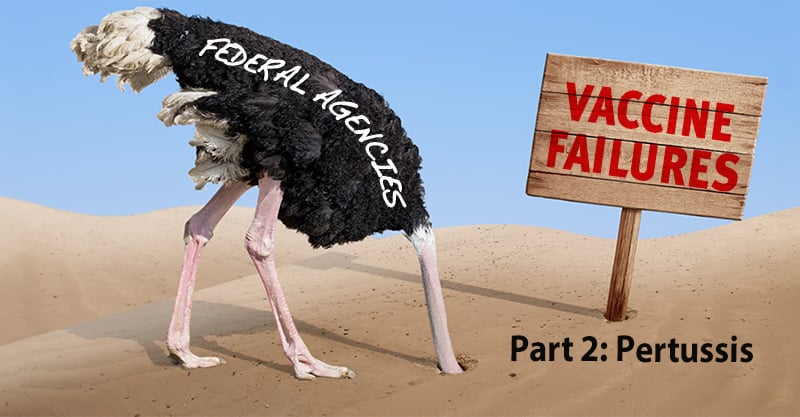 [Note: This is the second in a series of articles examining the serious problem of vaccine failure—a problem that, scandalously, remains unacknowledged by the public health officials and politicians promoting draconian vaccine mandates. Part 1 examined the measles vaccination.]

Over the past decade, an average of over 25,000 cases of pertussis (the respiratory illness also known as “whooping cough”) has been reported to the CDC annually. The CDC made no mention of pertussis in its round-up of “nine health threats that made headlines in 2019” (whereas 1,276 non-fatal cases of measles made the list), but, judging from news reports, 2019 was another banner year for pertussis—especially in the vaccinated. And, as numerous peer-reviewed studies published in the past few years show, the blame must be laid squarely at the feet of a fatally flawed vaccination program that is making vaccinated children more rather than less susceptible to pertussis over their lifetimes.

Pertussis vaccination targets the Bordetella pertussis (B. pertussis) organism, a “fastidious” bacterial pathogen spread by respiratory droplets. Nationally, pertussis-containing vaccine coverage is high—just shy of 95%—yet, by the CDC’s own admission, pertussis outbreaks are increasingly frequent. In addition, many cases of pertussis go undiagnosed and, therefore, unreported, with an estimated ratio of up to 1,400 undocumented pertussis infections for every recorded case. Given the high vaccination rate and the known fact that vaccinated persons can transmit pertussis asymptomatically (see Failure #4), it is important to dissect the spectacular failure of U.S. pertussis vaccination efforts in greater detail.

In the U.S., the CDC’s childhood vaccine schedule includes five doses of the diphtheria-tetanus-acellular pertussis (DTaP) vaccine at two, four, six and 15-18 months and 4-6 years, followed by a dose of tetanus-diphtheria-acellular pertussis (Tdap) vaccine at age 11 or 12 and more Tdap boosters in adulthood. (The CDC also recommends “off-license” administration of a Tdap dose to pregnant women during each pregnancy.) Numerous studies (both recent and not-so-recent) indicate that this dose-intensive vaccination regimen—far from providing meaningful protection—may actually be facilitating pertussis outbreaks.

Waning immunity (also called secondary vaccine failure) is one of the leading factors contributing to the pertussis fiasco. Top vaccine experts have been surprisingly frank in admitting this major shortcoming:

Failure #2: Pertussis outbreaks are frequent, and the majority of cases are occurring in the vaccinated.

In early 2019, news outlets covered a pertussis outbreak at an elite, 1,600-student private high school in Los Angeles. Notwithstanding a “really high vaccination rate,” 30 students—all vaccinated—developed pertussis, whereas none of the high school’s unvaccinated students (18 students with medical exemptions) contracted the infection. School officials even emphasized that the outbreak could not be attributed to the unvaccinated students. That same month, a UCLA researcher (one of the nation’s top authorities on pertussis vaccination) characterized the increased lifetime susceptibility to pertussis faced by DTaP-vaccinated children as a conundrum with no easy solution.

A study in Pediatrics that followed in July 2019 reported that 82% of pediatric pertussis cases identified by Kaiser Permanente California were in children who had been fully vaccinated (including 12% “fully vaccinated plus 1 dose”), and another 5% of cases occurred in partially pertussis-vaccinated children. From ages one and a half to seven years, vaccinated children’s pertussis risk quintupled once three or more years had elapsed since vaccination.

Capping off 2019, a Catholic school and daycare center in Houston—where 100% of the students were vaccinated—was forced to close early for the Christmas holidays due to a pertussis outbreak. In a letter to parents, the principal and school pastor stated that “Doctors are unsure why vaccinated children may still get the disease,” but news reports zeroed in on waning immunity as the likely culprit.

Failure #3: Pertussis risks are significant in infants but are also shifting toward adolescence and adulthood.

Pertussis incidence is high in infants. From 2000 through 2016 (a period of time in which pertussis incidence “increased significantly” across the U.S.), infants in their first year of life represented 15% of cases—with incidence anywhere from 4 to 63 times higher than for other age groups. Infants also had the highest hospitalization rate and accounted for 89% of deaths. However, another 60% of cases were in children: 32% in those aged 1-10 years and 28% in preadolescents and adolescents (ages 11-18).

At the same time, some researchers are describing a shift in the burden of pertussis toward adolescents and young adults as well as older adults. In one managed care setting, 59% of cases from 2006-2015 were in adolescents or adults. These shifts have implications in terms of both pertussis severity and health care costs. For example, while adults 65 years of age or older represented just 2.4% of U.S. pertussis cases between 2000-2016, these older adults constituted 14% of pertussis-related hospitalizations and 5% of deaths. Average charges for inpatient care for a pertussis episode in an older adult are significant—over $14,000 per patient. A recent study confirms that the clinical management of thousands of pertussis cases annually “is associated with substantial economic burden,” especially in patients from the two most vulnerable age groups—infants and older adults.

Failure #4: Asymptomatic vaccinated individuals are a major source of B. pertussis transmission.

A number of studies have suggested that “vaccinated individuals may harbor and transmit [pertussis] infection, even in the absence of typical pertussis symptoms.” In a 2020 systematic review, the authors conclude that “the prevalence of asymptomatic infection is high” and that “frequent close contact occurring in household settings may provide sufficient opportunity for B. pertussis to spread.”

In 2015, an article in BMC Medicine made a similar case, asserting that asymptomatic transmission by pertussis-vaccinated individuals to their close contacts provides “the most parsimonious explanation for many of the observations surrounding the resurgence of B. pertussis” in the United States as well as the United Kingdom. Drawing out various implications for pertussis vaccination policy, the authors commented that asymptomatic transmission:

The BMC Medicine authors also noted the likely futility of “vaccinating individuals in close contact with infants too young to receive the vaccine” (so-called “cocooning”). In fact, in light of studies suggesting that subclinically infected adults are the most likely source of transmission to infants, it seems possible that cocooning could increase rather than decrease risks for the very youngest.

In their 2017 article on waning immunity, Stanley Plotkin and coauthors noted that acellular-pertussis-containing vaccines are less effective than either natural infection or the more dangerous whole-cell-pertussis vaccines (no longer in use in the U.S.) in staving off B. pertussis colonization of the nasopharynx; other researchers concur that subclinical nasopharyngeal colonization by B. pertussis is common in highly vaccinated populations. An emerging and disturbing area of research links asymptomatic B. pertussis colonization to the development in the host of serious conditions such as epilepsy, multiple sclerosis (MS) and even Alzheimer’s disease. The researchers making this case for MS (who are developing a new pertussis vaccine) refer to the half-century-old observation that “The epidemiological features of multiple sclerosis are compatible with the hypothesis that the clinical illness may be an occasional manifestation of a widespread subclinical infection.”

Failure #6: Today’s pertussis vaccines are not keeping up with bacterial mutations.