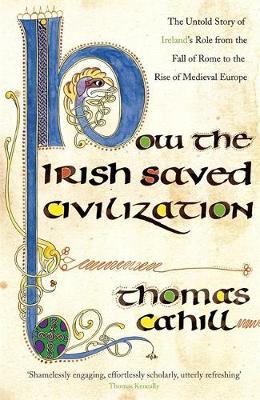 How the Irish Saved Civilization: The Untold Story of Ireland’s Role from the Fall of Rome to the Rise of Medieval Europe

This book covers the history of Ireland from the fall of the Roman Empire in the 5th century to the sacking of most Irish monasteries by Viking invaders in the 11th. It mostly focuses on the life of St Patrick (aka Patricius), a Romanized Britain kidnapped into slavery by Irish pirates in 401. In Ireland, he was forced to work as a shepherd for six years until he heard God’s voice telling him he was free to leave.

On his return to Britain, he undertook religious studies to become a priest and bishop and returned to Ireland as a missionary – the first in Church history to minister to so-called “barbarians.” He was also the first person in history to speak out against slavery.

In addition to converting Irish Celts to Christianity, St Patrick played a crucial role in establishing a network of Irish monasteries. As Ireland lacked significant population centers prior to the Viking invasions, these monasteries served as hubs of wealth, art and learning.

As barbarian hoards overran most of the former Roman Empire, most European libraries were burned and “copyists” who had copied classical texts (mainly for the wealthy Roman elite) vanished everywhere except in Irish monasteries.

The Irish invented the “codex,” a method of producing books as multiple pages of parchment rather than a single scroll. Like the Jews before them, the Irish enshrined literacy as a central religious act. Irish was also the first vernacular language to be used (written down) for popular literature, at a time when books elsewhere in Europe were all in Greek or Latin.

4 thoughts on “How the Irish Saved Civilization”