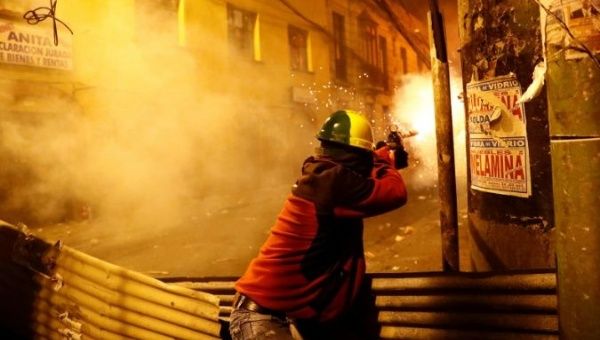 To the Bolivian upper classes, President Evo Morales has to resign even if forced by extreme violence, or through a civil war.

“It’s now or never!”, said a family in Santa Cruz de la Sierra, gathered close to Christ the Redeemer statue where thousands of demonstrators and road blockers stay seven days of the week, night and day.

That statement was in response to this reporter’s observance, that circumstances in Bolivia were getting out of control leading to a civil war. Answering that, the family laughed and did not hesitate in declaring: “We want things to get out of control. This is the only way to overthrow this president, once and for all.”

For almost 20 days, the South American country is at an economic standstill, as opposition groups block roads and prevent trade, with a few short exceptions for markets.

However, walking by The Ramada commercial center in downtown Santa Cruz de la Sierra, one sees almost every business with open doors, an act of defiance towards the rebel leaders of the national strike.

“Nobody in this area supports the strike,” one merchant told this author. “In the city, generally, not everybody opposes the President. On the contrary, I could say people are divided,” added the old woman, who owns a large store in The Ramada.

The owner’s daughter added: “Nobody did for Bolivia what President Evo Morales has done. He has granted several rights to workers, as no president did before. This is one thing that angers the elite.”

Everybody has been afraid to speak publicly, given the uncertainty and virulence of the currently protests. Recently, in this area, a woman spoke out against the strike saying people want and need to work as there is no money nor food anymore. She was beaten and obliged to kneel and ask demonstrators for forgiveness.

In regions like Cochabamba, Potosi, and La Paz, the situation is more tense, with frequent clashes between pro-government and opponent groups, and several wounded. In Cochabamba, a 20-year old man was killed last Wednesday, a victim of severe head injury, skull base fracture and brain death due to confrontations, which grow more and more. The civil war is fastly advancing in Bolivia.

The following has been a rule in Bolivia, before the last presidential election: the opposition spills their hate against the local government, especially against President Evo Morales but when confronted with some official data, internationally recognized in favor of the first indigenous president of the nation, criticism change its direction.

What had seen strong condemnations against the “situation of the country”, quickly changed to “a future dictator if many years in power.” So they start to explain their political theories about more than two or three mandates in the Presidency. And so, they create their conjectures.

Angela Merkel has been the German Prime-Minister since 2005, as her country has a solid democracy not questioned in Bolivia nor nowhere around the world. What determines a strong democracy in a country, is the solidity of its institutions.

“We will siege every government institution including tax collectors ones, and national borders, so the government won’t collect one cent. Evo is going to be a president without a State!”, said in the demonstration Luis Fernando Camacho, the leader of the current national strike based out in Santa Cruz de la Sierra.

Camacho’s biography and ancestry, outlined below in this report, is another serious indication that what is advancing in Bolivia is a Color Revolution, idealized by the American Gene Sharp [see The CIA and Nonviolence] to overthrow governments all over the world who refuse to align to the Washington regime.

President Evo Morales has challenged the opposition to give evidence of fraud to the Organization of American States (OAE), which has been auditing the Bolivia election. So far, nobody presented any piece of evidence of fraud regarding the last presidential election; the opposition claim, since OAS arrival to audit the elections, they do not want any audit nor a runoff anymore, but Morales’ resignation and new elections.

This reporter has checked people lost in their observances, as emotions overflowed. One of the features of a Color Revolution. It has been this way in Syria, Egypt, Tunisia, Libya, Brazil, and other countries lately.

There are other features in these protests is in Bolivia, clearly pointing to a Color Revolution.

There have been witnesses that road blockers have gotten 200 bolivianos (US$29) per day. A woman confirmed that information to this author, who says she has met a road blocker who has spoken to her about it.

Camacho has admitted  he paid 1,200 bolivianos (US$174) to a Cruceñista Youth Union member to burn the Electoral Tribunal in Santa Cruz de la Sierra on Oct. 23.

The businessman also funds all kinds of demonstrations against the current government, “and always did [before the elections],” which included the attacks against several official party’s head offices across Santa Cruz de la Sierra, on Sept.12.

Recent revelations point to a U.S.-backed plan of shaking the nation. The Radio Education Network of Bolivia (Erbol) has released 16 audios, which uncover talks between U.S. officials, Bolivian opponents, and former military.

In a three-part plan outlined by U.S. officials, former President Gonzalo Sanchez de Lozada (2002-2003) is mentioned. Lozada had Carlos Mesa (the principal opponent of Morales in the last election) as his vice-president and currently lives in the U.S.

U.S. senators Bob Menendez, Ted Cruz, and Marco Rubio are some of the American officials mentioned in the audios, linked to the Bolivian opposition planning a coup against President Evo Morales.

Officials of the State Department accredited in the country, such as Mariane Scott and Rolf A. Olson, have been meeting with high level diplomatic officials from Brazil, Argentina, and Paraguay, in order that they organize and plan destabilization actions against the Bolivian government, as well as delivering the U.S. funds to the Bolivian opposition […]
via “It’s Now or Never”: Bolivian Elite Destroying the Country