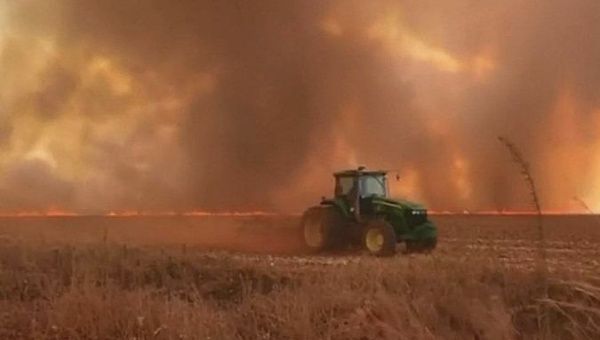 The point is this – if we do not know how to put pressure on the right actors who have been connected to destroying the Amazon, then our efforts will be for naught.

Most of the reporting on the fires raging in the Amazon try to identify the guilty parties.  Some of those that have been identified include ranchers and loggers, as well as the rightwing government of Jair Bolsonaro for its lack of enforcing environmental regulations.  Yet, what we need to consider is that no single actor is responsible for destroying the rainforest, but instead corporate supply chains that crisscross our planet.

To truly effect change, we need to target companies within these networks, which can occur if we restore Country of Origin Labeling (COOL) in agriculture and boycott firms that have been linked to deforestation.

As the Amazon burns, with the number of fires increasing more than 80 percent this year when compared to the last, many have proposed solutions to the crisis.  Leonardo DiCaprio has advised us to stop eating meat, while others encourage consumers to recycle, become educated, and contact their representatives.  There are also calls to privatize the rainforest to save it, with individuals such as Jeff Bezos – who is already the owner of one Amazon – implored to invest.

These supposed solutions have serious shortcomings.  For instance, what specifically will you demand from your representative?  Is the ask that they just ‘do something?’  The problem with eliminating meat from your diet is that you do not know if you are affecting the large-scale Brazilian rancher or the struggling family farmer who lives down the road.  Moreover, studies have shown that some forms of ranching – on well-maintained pastures with rotational grazing and the limited of fertilizers – can sequester carbon and help us face climate change.  And if the Amazon were privatized, then what if it is later partitioned and sold, again to ranchers and loggers, or perhaps to the tourist industry?

The point is this – if we do not know how to put pressure on the right actors who have been connected to destroying the Amazon, then our efforts will be for naught.

So, what can be done?  First, we need to know which farmers and ranchers are involved in deforestation.  While identifying individuals is difficult, we can make a push for the U.S. government to bring back the Country of Origin Labelling (COOL) in agriculture.  This policy became law with the 2002 Farm Bill, which required that retailors provide information on the sources of their food.  The Obama administration later repealed COOL for beef and pork products, but not for lamb, chicken, and goat meat, perishable agricultural commodities, macadamia nuts, pecans, peanuts, and ginseng.

If COOL were brought back and consumers saw that Brazilian beef was in their stores, then they could choose not to purchase it. Some farmer and rancher groups have been pushing for this policy’s return, as others see this as a way to assist struggling farmers in the United States.

While promoting the return of COOL would take time, now, we know of actual cases of corporations that have been connected to deforestation.  For instance, many ranchers burning the rainforest sell to the Brazilian firm JBS, which is the largest meat processor in the world.  If you are not familiar with JBS, then you may know its U.S. subsidiary – Swift & Company.  Meats with the Swift label are regularly available in most grocery stores.

For public sector workers, namely, teachers and professors with pensions, the Teachers Insurance and Annuity Association of America (or TIAA, formerly known as TIAA-CREFF) through its subsidiaries in Brazil has been involved in large-scale land deals that have been linked to deforestation and land grabbing.  Farmer and consumer rights groups have called out TIAA on this point for years.  Along with these organizations, TIAA beneficiaries could rethink how their retirement funds are invested.

Similarly, in a report from the Union of Concerned Scientists, Pizza Hut, Kroger, Subway, Wendy’s, Hormel, and Nestlé, were found to source beef in ways that contributed to rainforest destruction.  We also cannot ignore the mining industry, which is responsible for upwards of 10 percent of deforestation in the Amazon.  Vale SA is the world’s largest producer of iron ore, with operations in the Amazon.  Last year, the company entered into discussions with the Brazilian state to enlarge the world’s already largest open-pit mine, the Carajás mine, which is located in the Amazon […]