The Japanese government has decided to take the “cheapest and fastest” way to dispose of Fukushima nuclear-contaminated wastewater, which is to discharge it into the Pacific Ocean. 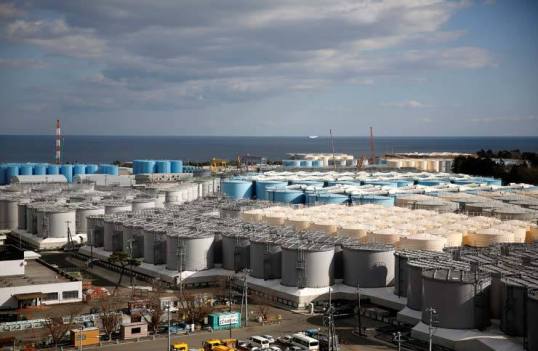 Storage tanks for radioactive water are seen at Tokyo Electric Power Co’s (TEPCO) tsunami-crippled Fukushima Daiichi nuclear power plant in Okuma town, Fukushima prefecture, Japan, in this picture taken on Feb. 18.
Greenpeace warns Korea of Japan’s radioactive water discharge
August 8, 2019
An international environment organization has said that Japan plans to discharge radioactive waste into the Pacific Ocean in the near future and Korea will fall particularly vulnerable.
Greenpeace Korea, the global NGO’s branch in Seoul, reposted on Facebook, Wednesday, a column by its nuclear specialist Shaun Burnie published in The Economist, saying Japan is planning to discharge more than 1 billion liters of contaminated water stored at the Fukushima nuclear plant since the massive earthquake and nuclear disaster of 2011.
Burnie wrote in his article that the Japanese government has decided recently to take the “cheapest and fastest” way to dispose wastewater, which is to…