In 1975 the CIA instigated a coup against Australian prime minister Gough Whitlam to remove him from power: https://www.theguardian.com/commentisfree/2014/oct/23/gough-whitlam-1975-coup-ended-australian-independence 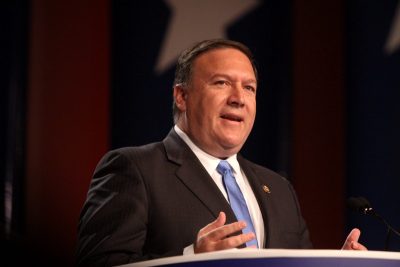 US Secretary for State Mike Pompeo has come under fire after a recording emerged of him saying he’d intervene to stop Labour Party leader Jeremy Corbyn becoming Prime Minister. In the recording first reported by the Washington Post, Pompeo suggests he won’t wait for Corbyn to be elected, rather he’ll attempt to stop it from being possible.

The off the record meeting was from when The Secretary for State met Jewish leaders to discuss Donald Trump’s proposed Peace Deal between Palestine and Israel.

Apart from appearing un-optimistic about the Peace Deal, he found time to comment on UK politics. When asked by an attendee;

if Corbyn “is elected, would you be willing to work with us to take on actions if life becomes very difficult for Jews in the U.K.?”