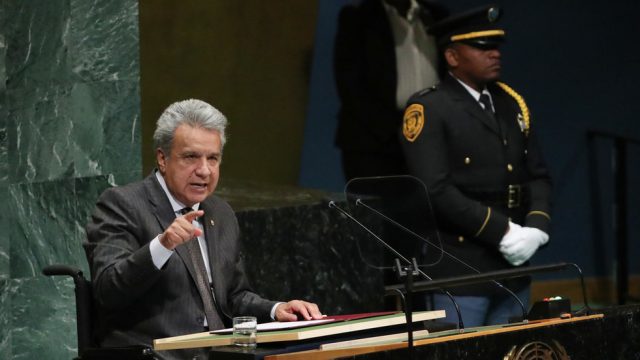 US-backed Ecuadorian President Lenin Moreno reneged on asylum agreements made with naturalized citizen Julian Assange, leading to his arrest on Thursday, but how exactly did relations with the whistleblower end up here?

Moreno won a narrow victory in 2017 to become president of Ecuador, having served as vice president under his predecessor Rafael Correa from 2007 to 2013 as part of the center-left PAIS Alliance. Much like Assange, Moreno was nominated for the Nobel Peace Prize in 2012, for championing the rights of the disabled (he is the only world leader who uses a wheelchair).

When he rose to power Moreno quickly locked horns with Assange, eventually revoking his internet access in March 2018 while also reducing the security detail at the embassy as a result of their ongoing spat. Moreno alleged that Assange had installed electronic distortion equipment in addition to blocking security cameras at the embassy. Their deteriorating relationship culminated in Moreno’s withdrawal of asylum granted to the whistleblower on April 11, 2019.

“Today I announce that the discourteous and aggressive behavior of Mr Julian Assange; the hostile and threatening declarations of his allied organization against Ecuador, and especially the transgression of international treaties, have led the situation to a point where the asylum of Mr Assange is unsustainable and no longer viable,” Moreno said in a video statement shortly after Assange’s arrest.

The writing had been on the wall for a long time, however.

Following his 2017 election, Moreno quickly moved away from his election platform after taking office. He reversed several key pieces of legislation passed under his predecessor which targeted the wealthy and the banks. He also reversed a referendum decision on indefinite re-election while simultaneously blocking any potential for Correa to return.

He effectively purged many of Correa’s appointments to key positions in Ecuador’s judiciary and National Electoral Council via the CPCCS-T council which boasts supra-constitutional powers.

Moreno has also cozied up to the US, with whom Ecuador had a strained relationship under Correa. Following a visit from Vice President Mike Pence in June 2018, Ecuador bolstered its security cooperation with the US, including major arms deals, training exercises and intelligence sharing.

Following Assange’s arrest Correa, who granted Assange asylum in the first place, described Moreno as the “greatest traitor in Ecuadorian and Latin American history” saying he was guilty of a “crime that humanity will never forget.”

Despite his overwhelming power and influence, however, Moreno and his family are the subject of a sweeping corruption probe in the country, as he faces down accusations of money laundering in offshore accounts and shell companies in Panama, including the INA Investment Corp, which is owned by Moreno’s brother.

Damning images, purportedly hacked from Moreno’s phone, have irreparably damaged both his attempts at establishing himself as an anti-corruption champion as well as his relationship with Assange, whom he accused of coordinating the hacking efforts.

via Who is Lenin Moreno and why did he hand Assange over to British police? — Aletho News

1 thought on “Who is Lenin Moreno and why did he hand Assange over to British police?”