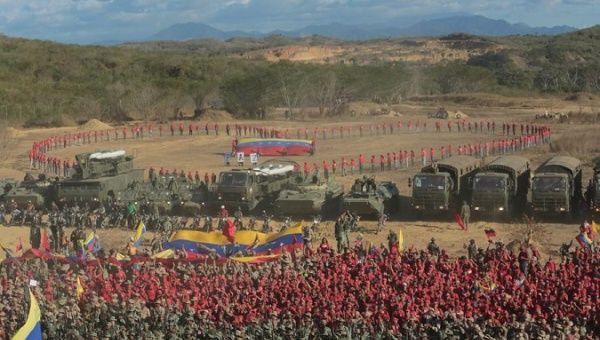 The president of Venezuela, Nicolas Maduro, headed a planning day Friday for the Civic-Military Exercises Ana Karina Rote 2019 to take place over the weekend throughout the national territory with the aim of shielding the country’s hydroelectric system amid possible new external attacks.

“The military operation Ana Karina Rote this Saturday and Sunday throughout the country is to consolidate the electric victory free from fascist and imperialist attacks on the electrical system,” said the head of state from the Miraflores Palace in the company of the military high command of the Bolivarian National Armed Forces (FANB).

The president’s message was addressed to all governors, mayors, and the military chiefs of the different regions of the country as well as movements of organized popular power that will participate in the deployment to ensure the operation of the strategic facilities of the National Electric System (SEN) and the systems of distribution of drinking water.

President Maduro explained that the exercises should serve to optimize the response capacity to possible aggression and put into practice national defense plans.

He instructed the creation of Commandos for the Defense of Basic Services, Special Peace Groups, which will integrate a new structure of the FANB together with the popular power from this weekend.

“We will deepen the civic-military union in all neighborhoods, towns, communities. I want to go deep… for territorial defense in the streets, neighborhoods and avenues of Venezuela,” he explained.

On Friday, the Venezuelan leader reiterated the involvement of the United States government in the cyber attack against the Ardas automated system of the Simon Bolivar Hydroelectric Power Plant, which caused a five-day national blackout.

via Venezuela Organizes Civic-Military Exercises in Defense of Electric Grid