Dr. Kass pled with his colleagues to be open to understanding WHY infectious diseases had declined so dramatically in the U.S. (as well as other first world countries). Was it nutrition? Sanitary methods? A reduction in home crowding? (We’ve since learned the answer to all three questions is, “Yes.”) He encouraged his colleagues to be careful not to jump to conclusions prematurely and to maintain objectivity and “devote ourselves to new possibilities.”

1977: McKinlay & McKinlay: The most famous study you’ve never heard of 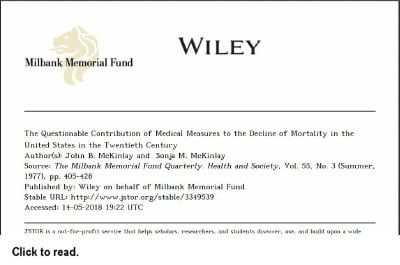 It won’t be the world’s easiest read, but I hope you take the time to read every word. In 1977, Boston University epidemiologists (and husband and wife) John and Sonja McKinlay published the seminal work on the role vaccines (and other medical interventions) played in the massive decline in mortality seen in the twentieth century, that 74% number I talked about in my opening paragraph. Not only that, but their study warned against the very behavior we are now seeing in the world of vaccines. Namely, they warned that a group of profiteers might take more credit for the results of an intervention (vaccines) than the intervention deserves, and then use those fake results to create a world where their product must be used by everyone. Seriously, they predicted that this would happen. (It’s worth noting that the McKinlay Study used to be required reading at every medical school.)

Published in 1977 in The Millbank Memorial Fund Quarterly, the McKinlay’s study was titled, “The Questionable Contribution of Medical Measures to the Decline of Mortality in the United States in the Twentieth Century.” The study clearly proved, with data, something that the McKinlay’s acknowledged might be viewed by some as medical “heresy.” Namely:

“that the introduction of specific medical measures and/or the expansion of medical services are generally not responsible for most of the modern decline in mortality.”

By “medical measures,” the McKinlay’s really meant ANYTHING modern medicine had come up with, whether that was antibiotics, vaccines, new prescription drugs, whatever. The McKinlay’s 23-page study really should be read cover to cover, but in a nutshell the McKinlay’s sought to analyze how much of an impact medical interventions (antibiotics, surgery, vaccines) had on this massive decline in mortality rates between 1900 and 1970: 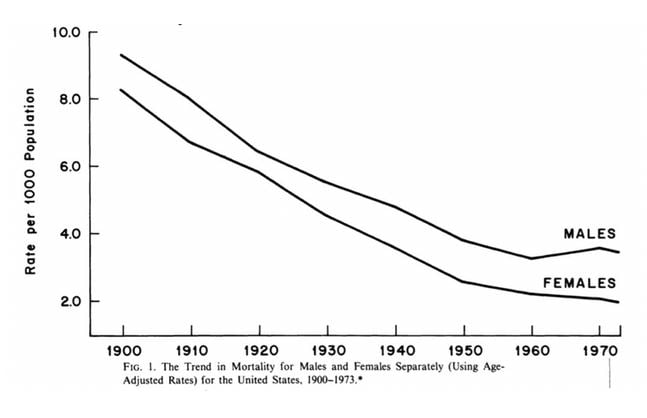 Here are some of the major points their paper made:

And, here’s the two doozies…

The paper makes two points that I really want to highlight, because they are so important. The first one concerns vaccines. They write:

“Even if it were assumed that this change was entirely due to the vaccines, then only about one percent of the decline following interventions for the diseases considered here could be attributed to medical measures. Rather more conservatively, if we attribute some of the subsequent fall in the death rates for pneumonia, influenza, whooping cough, and diphtheria to medical measures, then perhaps 3.5 percent of the fall in the overall death rate can be explained through medical intervention in the major infectious diseases considered here. Indeed, given that it is precisely for these diseases that medicine claims most success in lowering mortality, 3.5 percent probably represents a reasonable upper-limit estimate of the total contribution of medical measures to the decline in mortality in the United States since 1900.”

In plain English: of the total decline in mortality since 1900, that 74% number I keep mentioning, vaccines (and other medical interventions like antibiotics) were responsible for somewhere between 1% and 3.5% of that decline. Said differently, at least 96.5% of the decline (and likely more than that since their numbers included ALL medical interventions, not ONLY vaccines) had nothing to do with vaccines.

You don’t get to say you saved humanity if, at most, you were responsible for 3.5% of the decline in mortality rates since 1900 (and probably closer to 1%).

And then the McKinlay’s wrote something that made me laugh out loud, because it’s the thing we are seeing every day in today’s vaccine-hyped world:

“It is not uncommon today for biotechnological knowledge and specific medical interventions to be invoked as the major reason for most of the modern (twentieth century) decline in mortality. Responsibility for this decline is often claimed by, or ascribed to, the present-day major beneficiaries of this prevailing explanation.”

2000: the CDC puts the final nail in the coffin

In 1970, Dr. Kass raised the idea that public health officials need to be careful to not give the wrong things credit for the twentieth century’s massive mortality rate decline in the developed world. In 1977, Drs. McKinlay & McKinlay put data around Dr. Kass’ ideas, and showed that vaccines (and other medical interventions) were responsible for between 1-3.5% of the total decline in mortality since 1900. In 2000, CDC scientists reconfirmed all this data, but also provided more insight into the things that actually have led to declines in mortality.

Published in September 2000 in the journal Pediatrics and titled, “Annual Summary of Vital Statistics: Trends in the Health of Americans During the 20th Century,” epidemiologists from both Johns Hopkins and the Centers for Disease Control reaffirmed what we had already learned from McKinlay and McKinlay:

“Thus vaccination does not account for the impressive declines in mortality seen in the first half of the century…nearly 90% of the decline in infectious disease mortality among US children occurred before 1940, when few antibiotics or vaccine were available.”

The study went on to explain the things that actually were responsible for a massive decline in mortality:

“water treatment, food safety, organized solid waste disposal, and public education about hygienic practices.” Also, “improvements in crowding in US cities” played a major role. Clean water. Safe food. Nutrition. Plumbing. Hygiene. These were the primary reasons mortality declined so precipitously. At least according to the data and published science.