Americans have been taught — indoctrinated, perhaps — to think of the economy as capitalism. Quite literally: if capital returns are high — which is what all the above really measure — then Americans suppose the economy is booming. But capital returns — profits, dividends, stock markets, GDP (or their opposites, deficits) — are not the economy at all. They are just the success of capitalists, at increasing their capital. 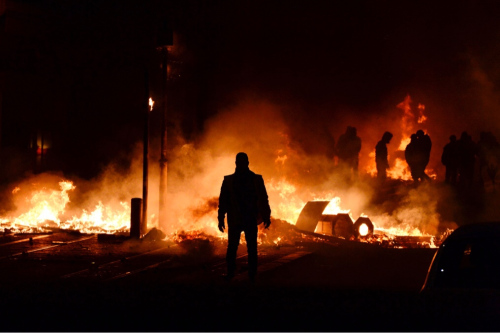 Does the gilet jaune movement signal the start of a resistance movement against capitalism?

Respect my existence or expect my resistance,http://bit.ly/2Gkjqya

[Martin Luther] King correctly judged, however, that real and lasting equality required the reform of capitalism ? a change in the system itself.http://bit.ly/2rzzEJi

Isaac Asimov Came up with the Three Laws of Robotics in his 1942 short story “Runaround”, as a safety feature for the terrifying idea of autonomous robots, or today’s ideas of autonomous drones and weapons platforms. However, there are many of us that fear capitalism as much as we fear intelligent drones.

I have therefore, adapted Asimov Laws of Robotics as the Four Laws of Capitalism;

1. A corporation may not injure human beings physically, mentally or economically or, through inaction, allow human beings to come to harm.

2. A corporation may obey orders given it by human beings except where such orders…