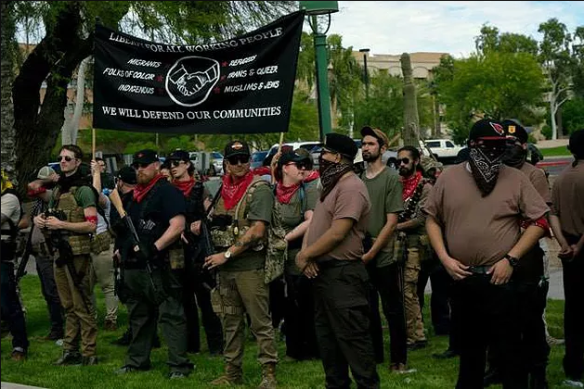 In the infancy of the Trump presidency, a new community defense network is espousing anti-racist and anti-capitalist politics to build coalitions in cities, small towns, and rural areas across America.

Redneck Revolt recruits predominantly poor and working class white people away from reactionary politics. The organization advances an analysis of their class condition and white supremacy’s role in upholding the wealth and privilege of a small, white elite.

The organization’s growing membership comes as media pundits, the Democratic Party, and the United States’ relatively small socialist parties all grapple with how to address the plight of working class white Americans in the wake of Donald Trump’s election.

“Economic anxiety,” a term presented by the media to defend Trump’s ascension, has become an internet meme for acts of racial terror. Hillbilly Elegy author JD Vance has been paraded around to defend and mythologize the travails of working class white Republican voters.

Establishment liberals debate whether these people, particularly in red states, are worth reaching out to at all. They find the ease with which they embrace nativism, social conservatism, and racism might threaten a liberal voting coalition that includes people of color, immigrants, and the LGBTQ community.

Yet the American historical context that animates the Republican Party-working class white alliance is often absent. The historical failure of neoliberalism to present sustainable pathways out of poverty or a meaningful safety net for American workers is scarcely contemplated.

It is unfair to let poor white people off the hook for their lack of solidarity with the rest of the working class. But it is only through engagement, recognition of the failures of both political parties, and organizing for a more radically unified working class politic that these issues can be overcome.

Historically small socialist organizations like Democratic Socialists of America have gained some traction promoting socialist, or more progressive liberal, politics in the wake of Senator Bernie Sanders’ 2016 presidential bid, but Redneck Revolt is not  prescriptive in regards to how to confront the inequities of the capitalist state.

“We don’t have some grand plan for how we want to remake the world. We’re tackling a specific problem, which is white supremacy, which we find to be built into capitalism,” said Pittsburgh Redneck Revolt organizer Shaun who, along with Mitch, spoke with Shadowproof about their organizing with Redneck Revolt.

Shaun and Mitch of spoke to Shadowproof about their work with Redneck Revolt. Their last names are being withheld because other members of Redneck Revolt have faced doxxing and harassment by militia members and white supremacists. They don’t want to put their families at greater risk.

“Our gripe with capitalism is it has utterly failed to make the vast majority of people free, because it was never really designed to,” Shaun continued.

Despite their lack of a prescriptive political ideology, they do have a fairly broad set of principles posted on their website. They include a rejection of capitalism, and “wars of the rich,” standing against “the nation-state and its forces which protect the bosses and the rich” and standing in “organized defense of our communities.” They declare their belief in the “need for revolution.”

Redneck Revolt’s anti-racist, anti-capitalist message seems to be taking hold in communities across the United States. The organization had just 13 chapters in January but has nearly tripled its chapters nationally in the last 6 months. The group now has 34 different branches, 26 of which are in states that voted for Trump. Multiple chapters have over fifty members.

Shaun notes the Pittsburgh chapter is representative of a wide variety of political ideologies, including “anarchists, libertarians, socialists, and even a couple of hold-out Republicans.”

Despite their diverse ideologies and backgrounds, Shaun explains that members are united by their rejection of white supremacy are drawn toward the group’s emphasis on community defense and survival programs. . .