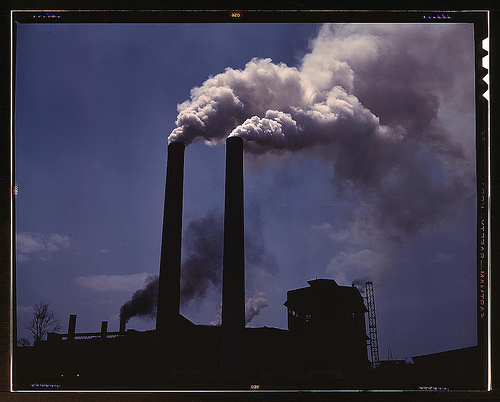 Note:This is an update to an earlier post, which many found to be too technical. The original, and a series of comments on it, can be found here. See also a more recent post here for an even less technical discussion.

Over the last 150 years, carbon dioxide (CO2) concentrations have risen from 280 to nearly 380 parts per million (ppm). The fact that this is due virtually entirely to human activities is so well established that one rarely sees it questioned. Yet it is quite reasonable to ask how we know this. . .

Another, quite independent way that we know that fossil fuel burning and land clearing specifically are responsible for the increase in CO2 in the last 150 years is through the measurement of carbon isotopes. Isotopes are simply different atoms with the same chemical behavior (isotope means “same type”) but with different masses. Carbon is composed of three different isotopes, 14C, 13C and 12C. 12C is the most common. 13C is about 1% of the total. 14C accounts for only about 1 in 1 trillion carbon atoms.

Isotope geochemists have developed time series of variations in the 14C and 13C concentrations of atmospheric CO2. One of the methods used is to measure the 13C/12C in tree rings, and use this to infer those same ratios in atmospheric CO2. This works because during photosynthesis, trees take up carbon from the atmosphere and lay this carbon down as plant organic material in the form of rings, providing a snapshot of the atmospheric composition of that time. If the ratio of 13C/12C in atmospheric CO2 goes up or down, so does the 13C/12C of the tree rings. This isn’t to say that the tree rings have the same isotopic composition as the atmosphere – as noted above, plants have a preference for the lighter isotopes, but as long as that preference doesn’t change much, the tree-ring changes wiil track the atmospheric changes.

Sequences of annual tree rings going back thousands of years have now been analyzed for their 13C/12C ratios. Because the age of each ring is precisely known** we can make a graph of the atmospheric 13C/12C ratio vs. time. What is found is at no time in the last 10,000 years are the 13C/12C ratios in the atmosphere as low as they are today. Furthermore, the 13C/12C ratios begin to decline dramatically just as the CO2 starts to increase — around 1850 AD. This is exactly what we expect if the increased CO2 is in fact due to fossil fuel burning. . .

Source: How do we know that recent COsub2/sub increases are due to human activities?

5 thoughts on “How do we know that recent COsub2/sub increases are due to human activities?”