*
*
Down the old memory hole: families are still waiting for the Mexican government to arrest and prosecute the police officers/gang members responsible for kidnapping and disappearing 43 student teachers in Ayotzinapa a year ago. John Kerry needs to forget about Russia and devote more attention to the 25,000 Mexicans disappeared by Mexican police, army and paramilitaries: US Senators Pressure Kerry over Ayotzinapa 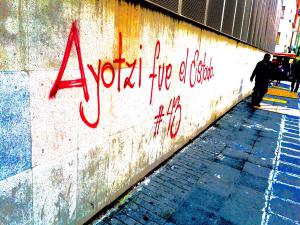 The Chiapas Support Committee of Oakland asks you and the members of your organization and community to join us in mobilizing to uplift the demand for deep justice and more starting on Saturday, September 26, 2015, the one-year anniversary of the attack, killing and disappearance of 43 student-teachers from Ayotzinapa in the city of Iguala in the State of Guerrero, Mexico.

Starting now and over the next week, call, email, tweet, and fax the President of Mexico saying:
¡Vivos se los llevaron, vivos los queremos!
You took them alive and we want them back alive!

Tell the President of Mexico:
“I join with the families of the 43 disappeared students from Ayotzinapa in calling for a new internationally supervised investigation and review of former-Attorney General Jesus Murillo and other officials’ involvement in the previous investigation, for their obstruction of justice.”