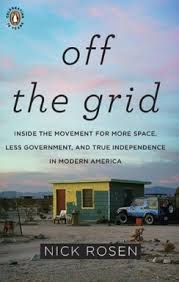 Off the Grid: Inside the Movement for more Space, Less Government, and True Independence in Modern America

Off the Grid is an exploration of the diverse permutations of the US off-the-grid movement. According to British journalist and documentary filmmaker Nick Rosen, living “off the grid” can have a variety of meanings. For some it means living self-sufficiently without the higher cost and carbon emissions of electric, gas, water and sewage connections. For others, it means living incommunicado without the daily intrusion of cellphones or email. In a few cases, involving political dissidents or those with criminal records, it means escaping the prying eyes of the surveillance society.

The movement includes liberal-leaning environmentalists, who Rosen describes as the “foot soldiers of the eco-revolution,” right wing civil libertarians and survivalists, the homeless and urban homesteaders who capture rainwater and produce their own electricity despite living within city limits.

Rosen is clearly a strong supporter – and part time practitioner – of off the grid living. He also strongly opposes Obama’s push to build a multibillion dollar “Smart Grid.”  With the latter, power companies use Smart Meters to continuously monitor users’ electricity consumption. Power companies (and Obama) are bending the truth when they claim a government subsidized smart grid is essential to respond to big growth in future electricity demand. Electricity demand is decreasing, due to the economic downturn and big improvements in efficiency.

The real reason power companies want Obama to build them a Smart Grid is to facilitate long distance trading in wholesale electricity. This is where they make their big money (Anyone remember Enron?).

The History of the Grid

The most interesting section of the book explores the historical development of the electrical grid. According to Rosen, it part of a deliberate scheme by Edison and GE (the company he founded) to increase electricity consumption. Both GE and Westinghouse launched massive propaganda campaigns to get people to sign up for the grid and purchase more electrical appliances to increase their consumption.

Although far less profitable for power companies, there’s no question that smaller, decentralized energy supply networks would have been more efficient* and cheaper for consumers.

The bulk of the book focuses on groups and individuals who have created off-the-grid communities to recapture the social engagement that has disappeared from modern society. People who join them make an intentional decision to rely on one another, rather than technology, to meet their needs.

One prominent example includes the Earthship community architect Mike Reynolds started in New Mexico.  An Earthship is an ecologically sustainable home built out of used tires filled with earth or sand and other recycled items. Dennis Weaver’s documentary Garbage Warrior, celebrates Reynold’s creation of the Earthship concept. Another highlight is Rosen’s fascinating visit to an Amish old order Mennonite community in Kentucky.

One part of the book that really irritated me was the chapter belittling civil libertarians who decided to live off-the-grid after discovering the 9-11 attacks were an “inside job.” Rosen makes it appear as if people who reject the Bush administration version of the Twin Tower attacks (as I do) are mentally ill and deluded.

Support for the 9-11 truth movement is in no way limited to paranoid right wing libertarians, as Rosen suggests. Globally the movement has millions of adherents and they represent the entire political spectrum.

*Our current electrical power system loses approximately 8-15% of the electricity it creates between the power plant and the consumer.

12 thoughts on “Going Off the Grid”